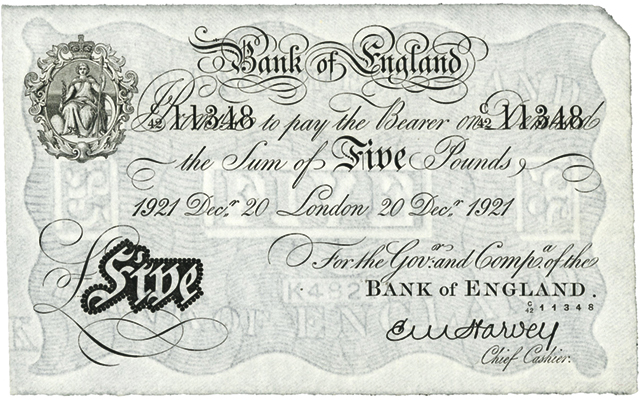 This 1921 £5 "white note" is the type of paper money that would have been in circulation in London. Customers who shopped at Selfridge's department store would certainly have used such notes.

I love the PBS television show Mr. Selfridge, about the American who opened a department store in London.

On a recent episode, Mr. Selfridge was shown holding some large white sheets of paper and they were supposed to be paper money.

Is that what British paper money looked like at the time?

The British period television drama series from the early 1900s is about Harry Gordon Selfridge and his London department store, Selfridge & Co.

The television series is an adaptation of Lindy Woodhead’s biography Shopping, Seduction & Mr. Selfridge. The series certainly seems to have captured the hearts of viewers.

And yes, that is what British bank notes looked like at that time.

It’s easy to see where the name “white notes” came from — the notes were printed on white paper in black ink and only on one side.

Perhaps the best known story about “white notes” is the Nazis’ failed plot to undermine England’s economy during World War II, known as “Operation Bernhard.” The operation was the subject of the 2007 motion picture, The Counterfeiters.

The counterfeiting operation took place at Sachsenhausen concentration camp in Germany. Between 1942 and 1945, skilled inmates were forced to produce nearly 9 million fake £5, £10, £20 and £50 Bank of England notes.

The initial plan was to destabilize the British economy by dropping parachutes bearing the fake notes, but officers of the Luftwaffe decided they did not have enough planes to deliver the forgeries.

Instead, many of the fake notes were used by the Nazis to pay unsuspecting merchants, foreign agents and spies. However, the notes were detected by the Bank of England soon after being used in circulation in Great Britain.

As the Allies advanced, large quantities of the fake notes were loaded into wooden crates and taken to Lake Toplitz, located in a dense forest high up in the Austrian Alps.

From 1943 to 1944, the shore of the lake served as a Nazi naval testing station. It appeared German troops had access to the perfect dumping ground. Witnesses say crate after crate was dumped into the more than 300-foot-deep lake.

Viewers of the Nov. 21, 2000, CBS 60 Minutes TV program watched as divers recovered wads of what turned out to be the fake notes.