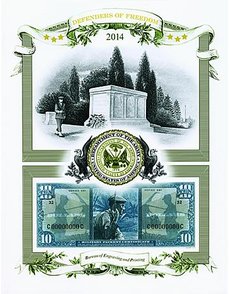 The first of five 2014 intaglio prints offered by the Bureau of Engraving and Printing honors the United States Army. Individual cards will be available for purchase Feb. 27 as the BEP participates in the American Numismatic Association National Money Show in Atlanta.

The 2014 intaglio print subscription program is now available to order from the Bureau of Engraving and Printing.

The first day to purchase the subscription program for the five prints is Feb. 3 at 8 a.m. Eastern Time.

Vignettes from many military payment certificates were used as the design focus for the 8.5-inch by 11-inch intaglio prints. Also, each card features the insignia of each branch.

The first 2014 intaglio print will honor the United States Army. It will be released on Feb. 27 in conjunction with the BEP’s participation at the American Numismatic Association National Money Show in Atlanta.

The vignette at the top of the card depicts a soldier of the U.S. Army 3rd Infantry Regiment guarding the Tomb of the Unknowns in Arlington National Cemetery, engraved by William B. Matthews in 1954 from a drawing by designer Robert Miller.

The vignette at the bottom, showing a U.S. Army “Green Beret” soldier, is the face design used on Series 681 $10 military payment certificates issued beginning in August 1969 and withdrawn in October 1970.

The United States Navy is the design focus of the second print, which will be offered beginning April 14.

The bottom image is from the face of the Series 691 $20 MPCs, which were never issued. The portrait of the woman was first used on an 1872 Export Tobacco Stamp and on a Plate Printer’s Ball ticket, no date given.

June 16 will be the first day of release for the third card, honoring the United States Marines.

The top vignette on the card recreates the photo taken Feb. 23, 1945, by Joe Rosenthal of five U.S. Marines and a U.S. Navy corpsman as they raise an American flag on Mount Suribachi during the Battle of Iwo Jima in World War II. It was engraved in 1950 by Matthew D. Fenton.

The bottom vignette was used on the face design of the Series 521 $10 MPC notes issued in May 1954 and withdrawn in May 1958. The portrait of the woman has also been used on various bonds and other government obligations.

The United States Air Force will be honored with the fourth card, offered beginning Aug. 5.

The top vignettes feature elements of the face and back designs for the series 681 $1 MPCs including a group of four F-100 Super-Sabre jet fighters shown flying in formation with their Thunderbird markings.

The face of the same note depicts an Air Force pilot with flying helmet, sun visor and oxygen mask, and that vignette also appears on the new print.

The vignette at the bottom of the card is the face design of Series 661 $20 MPCs issued October 1968 and withdrawn August 1969.

The fifth and final card honors the United States Coast Guard and will be offered beginning Sept. 22.

Military payment certificates were introduced after the end of World War II. Thirteen different series of MPCs were issued from September 1946 through March 1973. These small notes were issued in denominations of 5 cents to 50 cents and $1 to $20, and could be used only by authorized American personnel in designated areas. They were not used domestically.

A subscription for the 2014 intaglio prints costs $85, which provides a savings of $27.50 compared to the total price of purchasing all the cards individually.

Each of the individual cards will be available on the first day of sale for $22.50.

The deadline to purchase the subscription program is Feb. 26.