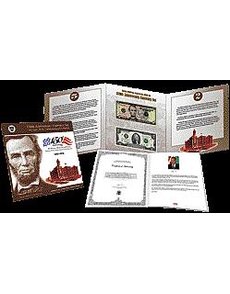 The Bureau of Engraving and Printing will begin to offer its limited-edition 150th Anniversary Currency sets on Dec. 11. The set is limited to an edition of 10,000. Individual sets are priced at $49.95; bulk pricing is also available.

The Bureau of Engraving and Printing will begin offering its 150th Anniversary Currency set on Dec. 11.

The BEP marked the 150th anniversary of its formation in 2012.

The Series 2009 $2 FRN in the set bears a serial number beginning with “2012,” to commemorate the anniversary.

Also, the last four digits of the serial numbers on the $2 and $5 notes match in each set.

The set includes a 52-page booklet titled 150 Years of Pride, Craftsmanship, and Innovation. The booklet traces the BEP’s history and includes a certificate authenticating the two enclosed notes as genuine United States currency.

According to the BEP, each note is protected by a clear, acid-free polymer sleeve and encased in a decorative folder.

A household limit of 100 sets will be imposed for the first week of release, from Dec. 11 to 18. Beginning Dec. 19, household purchase restrictions will be waived.

Bulk pricing is available for the 150th Anniversary Currency set at a price of $44.95 per unit for quantities of 10 or more.

These first 150 sets will also feature the hand-signed autograph of Treasurer of the United States Rosa Gumataotao Rios on the $2 and $5 notes.

Every regular set that a customer buys during the one-month enrollment period will give the purchaser one entry into the drawing.

A quantity restriction of two sets will be imposed for drawing winners.

Customers who win the drawing will not be permitted to return previously purchased sets in lieu of any set won and purchased via the drawing.

Drawing winners will be contacted by telephone or email after Jan. 11. Drawing winners are not obligated to purchase the signed 150th Anniversary Currency sets from the BEP.

For more information or to order the sets, visit the BEP website at www.moneyfactory.com, then click on the BEP Store button on the left side of the home page. ¦