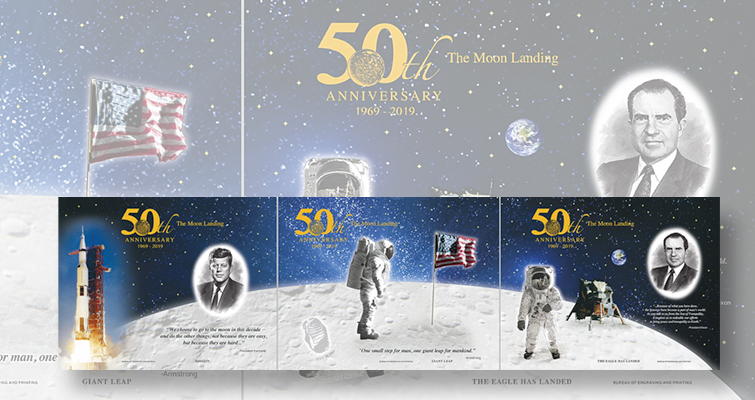 The Bureau of Engraving and Printing is offering three prints for 2019 commemorating the 50th anniversary of the Apollo 11 lunar mission. 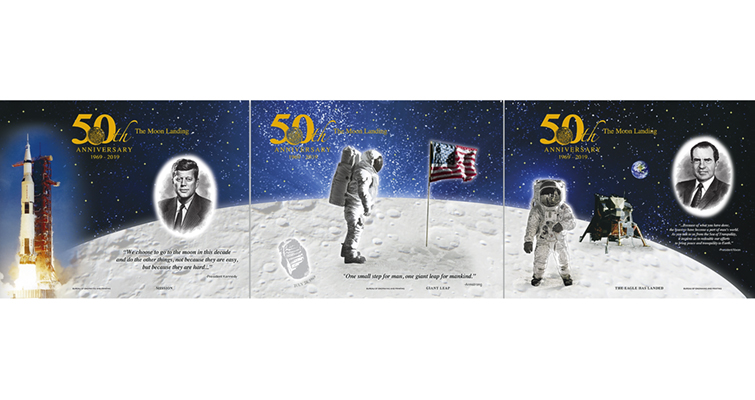 The Apollo Program was the result of concerted efforts by three presidential administrations. Though the BEP cannot issue a commemorative bank note for the anniversary, it developed the prints as a way of honoring the event.

The 50th anniversary of the July 20, 1969, Apollo 11 moon landing will provide a cornucopia of numismatic offerings during the course of the year.

Even though it is not even remotely possible that the United States would issue a commemorative bank note for the event, the Bureau of Engraving and Printing has devised for itself a creative and colorful way to join the festivities.

A three-piece 50th Anniversary Commemorative Engraved Print Collection opened for subscriptions at noon on Dec. 20, with deliveries of the first print scheduled to start the week of Jan. 21.

The three prints are titled “Mission,” “The Eagle Has Landed,” and “Giant Leap.” Each color card shows a scene from the moon mission and a BEP vignette.

The first card, “Mission,” represents the U.S. space program leading up to the first manned lunar landing. It has an embossing of the Apollo 11 capsule atop its Saturn V rocket at launch and a portion of the lunar surface, with an engraving of President John F. Kennedy and the inscription, “We choose to go to the moon in this decade and do the other things, not because they are easy, but because they are hard.” Kennedy famously called for a manned landing on the moon in a speech given Sept. 12, 1962. That speech prompted the Apollo missions that would realize his dream in the Apollo 11 flight.

The second card, “The Eagle Has Landed,” recalls Neil Armstrong’s first message from the lunar surface and features an engraving of President Richard M. Nixon with an inscription from Nixon’s July 20, 1969, conversation with the astronauts while two of them were on the moon, “Because of what you have done, the heavens have become a part of man’s world. As you talk to us from the Sea of Tranquility, it inspires us to redouble our efforts to bring peace and tranquility to Earth.” The card also has an engraving of the “Buzz Aldrin on the Moon” photograph taken July 20, 1969 (source for the design on the reverse of the U.S. Mint’s 2019 Apollo 11 50th Anniversary commemorative coins). The reflection in astronaut Aldrin’s helmet shows astronaut Neil Armstrong, the American flag, and the lunar lander. The lunar module is behind Aldrin. A view of the lunar surface is embossed, with planet Earth in the sky beyond.

“Giant Leap” is the third card. An image of Armstrong’s lunar footprint (now on the obverse of the commemorative coins) is embossed in this card’s portion of the moon’s surface, his famous words, “One small step for man, one giant leap for mankind,” and an engraving of the astronaut looking at the American flag, combine to capture the historic moment seen and heard around the world.

The prints are priced at $17 each. Subscribers are guaranteed to receive the full print collection for a total price of $51. After the first card in January, “The Eagle Has Landed” and “Giant Leap” prints will ship in spring and summer 2019, respectively. Together, the cards form a panorama.