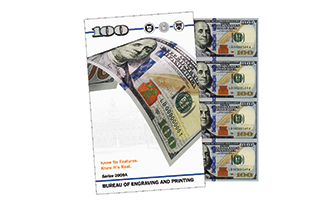 The uncut sheets were printed for the Federal Reserve Bank of Atlanta and are available in four-, eight- and 16-subject sheet sizes. All of the notes bear the facsimile signatures of Treasurer of the United States Rosa "Rosie" Gumataotao Rios and former Treasury Secretary Timothy Geithner.

The uncut sheets are also available for purchase in the Visitor Center gift shops at the Washington, D.C., BEP plant and the BEPs Western Currency Facility in Fort Worth, Texas.

The "A" in the Series 2009A designation was unexpected when the notes were released in October. All educational materials for the new-design notes indicate a Series 2009 designation, because those materials were approved and printed long before several production delays at the Bureau of Engraving and Printing.

The Federal Reserve Board decided to add the letter A after the series year date to acknowledge the gaps in production between the time the design was approved in 2009 and the time the first notes were released.