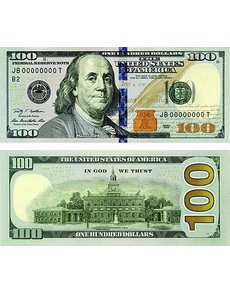 The BEP has incorrectly listed Series 2009 $100 Federal Reserve notes in 2011 monthly production reports. While previously printed notes have been staged for processing, no new notes have been produced.

Although the Bureau of Engraving and Printing’s August production report records 6.4 million colorized Series 2009 $100 Federal Reserve notes, no notes of that denomination and series were printed or processed during the month, according to BEP officials.

That figure was inadvertently included in the monthly production report; the 6.4 million figure actually reflects the number of colorized $100 FRNs that have been “staged for processing,” not what was printed.

In September 2010, the BEP “identified a problem with sporadic creasing of the paper during printing of the new $100 note, which was not apparent during extensive pre-production testing,” according to a Federal Reserve announcement Oct. 1, 2010. Subsequent monthly production reports have listed 2009 $100 notes, but a BEP spokeswoman confirmed Oct. 14 that all of those reports are in error and that the 2009 $100 notes should have not been listed in any of those later reports.

The next step for the 6.4 million notes listed on the August production report is for the notes to be “processed,” meaning they will be manually and electronically inspected, at the BEP’s Western Currency Facility in Fort Worth, Texas.

The August 2010 production report will be removed from the BEP website and will not be reposted until the issues with the production reporting process are resolved, according to a BEP spokeswoman.

The BEP will also delay posting the September 2011 production report. The error reports published earlier will have to be corrected.

The notes represent a portion of millions of redesigned $100 FRNs that were examined by the BEP. A large, and as yet unknown total, number of printed colorized $100 notes were withheld from release in 2011 because of problems with sporadic creasing of the paper during printing.

On Oct. 1, 2010, Federal Reserve officials announced that the Feb. 10, 2011, release date would be delayed because of the sporadic creasing of the paper during printing.

Following that announcement, the BEP conducted a manual examination of the new notes produced to date.

A December 2010 national news report had stated that 1.1 billion of the Series 2009 $100 FRNs were unusable because of the printing problem.

BEP officials characterized the news accounts as inaccurate, and stated that of the 22 million notes examined at that time, “less than 2 percent of the notes examined were deemed unfit.”

In a statement on June 14, 2011, the Federal Reserve Board announced the new colorized Series 2009 $100 FRNs may not be placed into circulation until the end of 2011 at the earliest.

Now the earliest release date is more likely sometime in 2012, since Federal Reserve officials have stated that at least six months will pass between the announcement of an issue date and the day of issue.

The redesigned $100 FRNs represent the first redesign of the denomination since 1996 and bear the facsimile signatures of Treasury Secretary Timothy F. Geithner and United States Treasurer Rosa Gumataotao Rios.

The new $100 FRNs include a number of sophisticated anti-counterfeiting features, including a blue 3-D security ribbon with multiple shifting images of a bell and the inscription “100” and, separately, an image of an inkwell that when tilted reveals a Liberty Bell image that changes color.

The blue 3-D security ribbon, an optically variable device, is clearly visible on the face of the note. The ribbon represents a new form of the technology not previously used on any U.S. paper money.

The ribbon was developed by Crane, of Dalton, Mass.

During the April 21, 2010, unveiling of the new $100 design, BEP Director Larry R. Felix said the new notes are more difficult to print than the older versions because the blue three-dimensional security ribbon is woven into the currency paper before the printing begins. He said that the ribbon creates a small wave in what would otherwise be flat paper.

BEP and Federal Reserve officials have not revealed what caused the periodic creasing that occurred during printing.

The delay in the release of the Series 2009 notes has required the BEP to continue printing Series 2006 notes, of the current design style, with the facsimile signatures of Bush administration officials.

In a move that surprised some in the paper money collector community, the BEP began producing Series 2006A $100 FRNs in January 2011. The production of the notes is to “meet public demand,” according to a representative of the Federal Reserve Board.

The Series 2006A $100 FRNs feature the facsimile signatures of former Treasury Secretary Henry M. Paulson Jr. and U.S. Treasurer Anna Escobedo Cabral, both of whom served under President George W. Bush. The Series 2006 and 2006A notes are identical with the exception of the A suffix letter added to the series year date.

All the Series 2006A $100 FRNs printed as of August have been printed at the BEP’s Washington, D.C., plant and all bear the K prefix letter in the serial numbers. The notes have been printed for the Federal Reserve Banks of Boston (A), New York (B), Philadelphia (C), Cleveland (D), Richmond (E), Atlanta (F), Chicago (G), St. Louis (H) and San Francisco (L). ¦