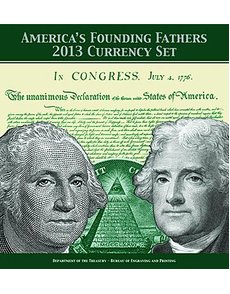 Beginning April 8, the Bureau of Engraving and Printing is taking orders for its newest product — the America’s Founding Fathers 2013 Currency set. The set contains a Series 2009 $1 Federal Reserve note and a Series 2003A $2 FRN. Both notes have matching serial numbers beginning with “2013.”

Collectors can begin buying the America’s Founding Fathers 2013 Currency set from the Bureau of Engraving and Printing during a two-week prerelease period set for April 8 to 21.

The notes bear the portraits of George Washington and Thomas Jefferson, respectively.

The set is packaged in a trifold folder, and each note is protected by a clear acid-free polymer sleeve.

A limit of 50 sets per household is imposed during the prerelease period. Beginning April 22, household purchase restrictions are waived. A total of 5,000 sets will be produced.

The set is priced at $19.95. Bulk pricing is available at $16.95 each for quantities of 50 or more. This product will be offered during calendar year 2013 only, according to the BEP.