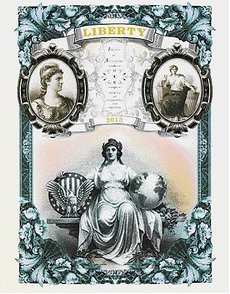 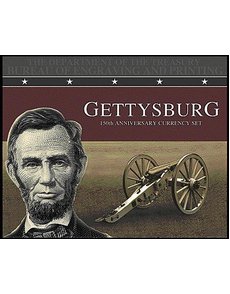 The two-note Gettysburg 150th Anniversary Currency set contains a Series 2009 $5 Federal Reserve note for the Federal Reserve Bank of Chicago, with a serial number that begins with the digits 1863. The second note is a Series 2009 $2 FRN bearing a serial number beginning with the digits 2013. The above image is the cover of the two-note Gettysburg set offered by the Bureau of Engraving and Printing.

Aug. 13 is the first day of sale for the Gettysburg 150th Anniversary Currency set and for the final 2013 intaglio print by the Bureau of Engraving and Printing.

The second note is a Series 2009 $2 FRN, also for the Federal Reserve Bank of Chicago, with a serial number beginning with the digits 2013.

As well, the last four digits of the serial numbers on both notes in a set are matching.

Each note is in a clear, acid-free polymer sleeve and packaged together in a commemorative trifold folder.

A limit of 25 sets per household will be imposed during the pre-release period. After Sept. 2 household purchase restrictions will be lifted.

Bulk pricing will be available for $34.95 for quantities of 25 or more sets following the first day of release.

Also available on Aug. 13 will be the third and final intaglio print produced by the BEP in 2013.

The final print in the “Ideals in Allegory” series features a design employing several vignettes that feature an allegorical female representation of Liberty.

The top left image is a vignette engraved by G.F.C. Smillie in 1914 and used on the face of the $5,000 Puerto Rico Irrigation Registered Bond, Gold Loan of 1919.

The two other prints in the series featured allegorical representations of Peace, which was released June 3, and Justice, released July 8.

The Gettysburg sets of notes and the intaglio print card will be available for purchase at www.moneyfactory.gov or order by telephone by calling toll free 800-456-3408 or by toll-free fax at 888-891-7585. ¦