BEP has no plans to redesign dollar note 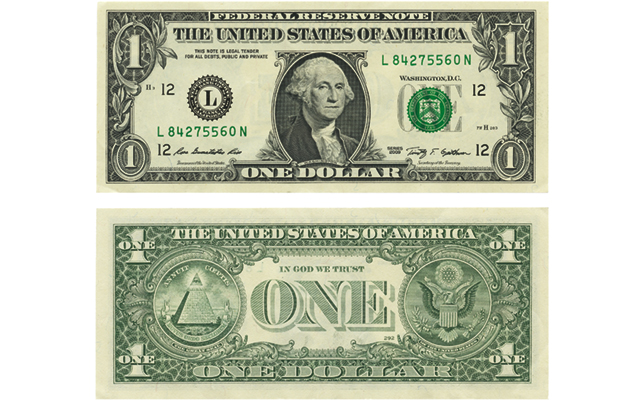 The BEP is comfortable with the current law that prohibits the bureau from printing $1 Federal Reserve notes with high-tech anti-counterfeiting devices.

The Bureau of Engraving and Printing is not asking Congress to allow it to redesign the $1 Federal Reserve note to incorporate the same high-tech, anti-counterfeiting features that have been on other U.S. currency notes since the mid-1990s.

That was what BEP Director Larry R. Felix told a House Finance Subcommittee on Monetary Policy and Trade during a June 11 hearing on the future of paper money and coins.

In his testimony, Felix said that the BEP was doing another currency redesign, but was specifically barred by Congress from changing the $1 bill.

Campbell said he assumed that Felix would like to have that prohibition removed so some of the anti-counterfeiting innovations could be added to the $1 note.

One reason is that the $1 bill is relatively inexpensive to print, Felix said. It costs about four cents each to print a $1 bill, compared to the 12 cents for the $100 bill, which has a number of high-tech features not used on the lower denomination note.

Felix’s statement was one of the few snippets of news that the nearly 90-minute hearing produced.

The subcommittee had apparently scheduled the hearing in part in hopes of learning how the U.S. Mint was proceeding in its study of what metals might be used to reduce the price of producing cents and 5-cent coins, both of which now cost more to manufacture than their face value.

U.S. Mint Deputy Director Richard A. Peterson told the panel that the agency’s search for new metals continues to focus on steel and zinc as possible metals.

Lead was ruled out because of environmental concerns, and aluminum has not been considered practical for U.S. coins, he said.

As for what the Mint is likely to recommend to Congress, Peterson told the lawmakers to wait until December when another report to Congress will be released.

Peterson repeated a warning from the Mint’s first biennial report to Congress in December 2012, that nothing the agency has found indicates that any known viable metal can bring costs for manufacturing a cent to below the face value of the coin.

That finding such a metal is “highly unlikely” was a sentiment echoed by the Royal Mint’s Andrew Mills.

Mills, the Royal Mint’s director for circulating coins, was asked by the panel to relate how Great Britain successfully lowered its coinage costs.

Mills outlined a program of reducing the number of circulating coins, changing the composition of some and the shape of others. Mills said his organization would be more than happy to share its ideas with the U.S. Mint.

Mills’ account intrigued Rep. Steve Stivers, R-Ohio, who is pushing legislation that would mandate that all circulating U.S. coins be made of plated steel.

Stivers asked Mills if he believed the Royal Mint could produce a cent for less than a cent. Mills replied that he doubted it could.

Rep. Mick Mulvaney, R-S.C., wanted to know what Felix and Peterson thought of Bitcoin and other so-called Internet-based currencies.

Both men said those were questions that would have to be resolved by the Federal Reserve. Their jobs were to make money, not decide currency policy questions, they said.