BEP gets approval for FRN enhancements 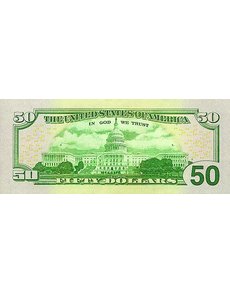 Treasury Secretary Timothy F. Geithner has approved several features on Federal Reserve notes to aid the blind and visually impaired in identifying denominations, including continuing to use large numbers on the notes as on several current FRNs, and new tactile features still in development.

The enhancements to provide meaningful access to Federal Reserve notes were recommended to Geithner in early 2011 by Bureau of Engraving and Printing, Federal Reserve Board and U.S. Treasury officials.

Two of the three approved enhancements have to do with the design of notes — raised tactile features and large, high-contrast numerals — while the third is a coupon or voucher system that will enable blind and visually impaired persons to purchase a hand-held currency reader.

The decision about which denomination will be the first to be redesigned to include the enhancements has yet to be made, according to BEP Director Larry R. Felix. Testing and development of specific currency designs by denomination are now under way.

The use of a raised tactile feature would be something new for U.S. paper money. No device of this style has ever been used on U.S. paper currency, although tactile features are common on notes of other nations.

The tactile feature will be unique to each FRN denomination and provide users with a means of identifying each denomination by way of touch, according to the BEP.

To determine what enhancements could be added to Federal Reserve notes, the BEP commissioned a comprehensive study in 2009 to analyze options for blind and visually impaired persons to discern denominations of U.S. paper money.

A variety of options were studied during extensive testing. Existing world notes in addition to prototypes specially produced by the BEP were used in the study.

The results of the BEP study showed the raised tactile feature, used on some world notes, “was more effective than virtually every other kind of accommodation tested, including different-sized notes.”

The study did indicate that raised tactile features do wear out eventually, “so the effectiveness of the feature diminishes over time.”

One enhancement is already in use — large, high-contrast numerals, which the BEP began adding to Series 1996 $50 FRNs to help improve identification of notes for persons with impaired vision. That technology has continued to be used on subsequent redesigns of other denominations, including Series 2009 $100 FRNs, which have not yet been released into circulation. Among denominations of current designs in circulation, only the $1, $2 and $100 notes lack the large numeral on the back.

Currency readers would help blind and visually impaired persons independently identify their cash without having to ask a stranger or family member for assistance. The 1996 generation of notes features an infrared machine-readable feature that can be read with a hand-held currency reader. That feature was introduced beginning with the May 24, 2000, release of Series 1999 $5 and $10 notes, both of the 1996 style (having larger, offset portraits, though without the additional colors and features of the current style).

In April 2011 a free mobile phone and tablet application developed by the BEP to assist blind and visually impaired users to denominate Federal Reserve notes was made available. The EyeNote application is now available for Apple mobile devices for free through iTunes. It uses image recognition technology to determine a note’s denomination through the mobile device’s camera and announces the denomination audibly.

The accommodations authorized by Geithner will meet the requirement of a court decision in a lawsuit filed in 2002.

In May 2008 the United States Court of Appeals for the District of Columbia Circuit upheld a lower court’s decision in 2006 that the Treasury failed to design, produce and issue paper money that is readily distinguishable to blind and visually impaired individuals.

The decisions involved a lawsuit filed in 2002 by the American Council for the Blind and two people with visual impairments, Patrick Sheehan and Otis Stephens.

The lawsuit alleged that the physical design of the FRNs violates Section 504 of the federal Vocational Rehabilitation Act.

Treasury officials said that the order did not apply to the redesign of the $100 FRNs that was in progress because the BEP was significantly far along with the design of the note before the court issued its order.

The Series 2009 $100 FRN was scheduled for release in February 2011 but in October 2010 Federal Reserve Board officials announced the planned release date would be delayed because of production problems.

The issuance of the redesigned $100 FRNs was delayed because of a problem with sporadic creasing of the paper during the printing of the new notes. BEP and Fed officials have not revealed what caused the periodic creasing. Fed officials now say collectors might not see new colorized notes until the end of 2011 at the earliest.