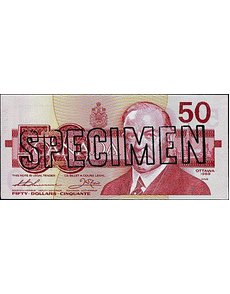 This Bank of Canada 1988 $50 specimen note was printed on DuraNote polymer substrate. It will be among nine lots of 14 DuraNote specimen notes at auction Oct. 2 by Spink in London.

Bureau of Engraving and Printing officials confirmed Sept. 7 that in 1998 as many as 40,000 sheets of Federal Reserve notes were printed on a polymer substrate known as DuraNote.

All of those sheets were evaluated by BEP officials and destroyed, a BEP spokeswoman said Sept. 7.

Coin World articles covering the BEP’s experimentation with a polymer substrate date back to 1997, but BEP officials had never provided specific details about the type of polymer substrate or the number and denomination of any FRNs printed on the substrate.

The BEP confirmed the use of DuraNote after Coin World became aware of 14 Canadian specimen notes printed on DuraNote substrate in the late 1980s that are being offered in an Oct. 2 auction conducted by Spink in London (see page 73 for details).

Coin World’s search for more information led to an article in the August 1998 issue of Mobil World, a now defunct employee magazine published by Mobil Oil, that told the story of how the Mobil Films Division produced a polymer film used to print test notes for various countries.

The article stated that Federal Reserve notes were being printed in the United States using the DuraNote polymer substrate Mobil had created in association with AGRA Vadeko, a Canadian firm.

According to the article, “1,000 sheets of bank notes for the United States Bureau of Engraving and Printing” had been printed by the time the article was written, and Mobil Oil officials expected another 20,000 sheets to be printed for the BEP during the remainder of the summer of 1998.

“The qualification process for acceptance as the substrate for a nation’s currency typically takes three to four years,” noted the article. “DuraNote substrate is about halfway through that period in the United States, as well as being in test printings in 28 other countries.”

In June 1997, BEP officials confirmed to Coin World they had experimented with what they described as a “new petroleum or plastic-based substrate instead of the cotton-based substrate” as a substitute on which FRNs could be printed.

BEP officials said they had been studying Australia’s 1988 conversion to a plastic polymer for a special commemorative note.

In 1998, the BEP’s solicitation for paper included a provision to consider bids for an alternative substrate, such as plastic, from a manufacturer that wanted to offer a paper made from something other than the standard 75 percent cotton, 25 percent linen mix used for printing Federal Reserve notes.

As Coin World reported in past articles, a basic polymer substrate begins as a roll of clear plastic film. The film is then specially coated to accept different security devices directly embedded into the substrate. The different coatings make the substrate opaque and allow layers of sophisticated security devices to be added. Once the printing is complete, an overcoating of clear varnish is applied to the finished note.

During a March 1998 House Banking Subcommittee hearing about the threat of counterfeiting by personal computer and scanner, the topic of using a polymer substrate was raised. Thomas A. Ferguson, then acting director of the BEP, testified that the BEP was studying additional security features, including incorporating a polymer substrate, for Federal Reserve notes.

He stated that even though notes printed on polymer substrate could be produced on the equipment currently in use by the BEP, it was premature to characterize polymer as superior to currency paper for security.

When asked by the subcommittee if the BEP was considering plastic notes, such as used in Australia and Thailand, Ferguson responded that they were under consideration. He noted that plastic notes cost about twice as much to produce as paper, but notes printed on plastic last many times longer than paper notes.

Following the congressional hearing and subsequent media coverage, the BEP experienced a spate of telephone calls from the public wanting to know when they could expect to see “plastic” currency in circulation. BEP officials said then, and continue to say, that no decision has been made about using a polymer substrate in the future.

In the early 1960s a crisis started the nation of Australia on the journey from paper to polymer. Australia’s currency was changed from the British pounds system to a decimal system. Shortly after issuing the first dollar-denominated notes in 1966, note counterfeiting increased.

In response to the counterfeiting problems, Reserve Bank of Australia officials along with Note Printing Australia, a division of the bank that prints Australia’s notes, began to study alternatives to paper notes.

That began a nearly 20-year research project between the RBA and NPA. Eventually the decision to convert to a polymer substrate was made. In 1988 Australia’s first polymer note rolled off the presses.

Securency, an Australian company, makes the polymer substrate used to print Australian bank notes as well as bank notes for nearly 30 other countries.

In addition to increased security benefits, RBA and NPA discovered that bank notes printed on polymer have these features:

? They don’t get dirty as easily as paper notes.

? They have a longer circulation life than paper notes, being less vulnerable to repeated folding of the notes.

? They can accept a variety of security devices that are not possible to use on paper notes.

? They can be recycled for other uses beyond being shredded and added to a landfill.

The first of Australia’s polymer bank notes was a $10 commemorative note issued in 1988 to mark the 200th anniversary of the establishment of the colony of New South Wales in Sydney Cove. Abandonment of paper took less than a decade to complete.

In 1996, Australia became the first country to issue all denominations of notes on polymer. Since then many other nations have followed. ¦