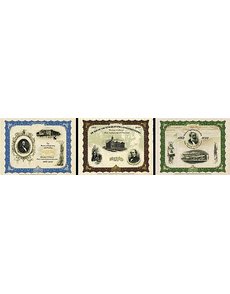 Images courtesy of the BEP.

Collectors can begin subscribing to the Bureau of Engraving and Printing’s 2012 Intaglio Print subscription program, which celebrates the BEP’s 150th anniversary this year.

The subscription ordering period began March 12. The deadline to subscribe to the program is May 9. The subscription program guarantees subscribers will receive all three intaglio print cards.

The first card will be released May 10 in conjunction with the American Numismatic Association National Money Show in Denver. The design for that card has a blue engraved frame surrounding three subjects: an ornately framed portrait of Abraham Lincoln, a patriotic vignette and a view of the main United States Treasury Building.

The second card will be available Aug. 7 in conjunction with the ANA World’s Fair of Money in Philadelphia. Within the brown engraved frame on this card is a portrait of Salmon P. Chase (who served as U.S. Treasury secretary under Lincoln), a patriotic vignette and a view of the Auditors Building, the first home of the BEP. Faded in the background are historic images of early printing operations at the BEP.

The third card, to be released Oct. 18, has a portrait of Spencer M. Clark, the BEP’s first director, and two patriotic vignettes, all within a green engraved frame. The card also depicts a vignette of the BEP’s Western Currency Facility in Fort Worth, Texas, and an aerial view of the Fort Worth plant faded in the background.

All three cards bear the text 1862 2012 BUREAU OF ENGRAVING AND PRINTING HONORING 150 YEARS OF PRIDE, CRAFTSMANSHIP AND INNOVATION. A special anniversary logo also appears on each card.

Each intaglio print will ship after the first day of sale for that card. A subscription to the 150th Anniversary Series Subscription Program costs $51. Individual 2012 intaglio cards are priced at $20 each.

Collectors can also order the subscription by telephone at 800-456-3408 or by sending orders to Bureau of Engraving and Printing, Mail Order Sales Department 515M, 14th and C streets SW, Washington, DC 20228.