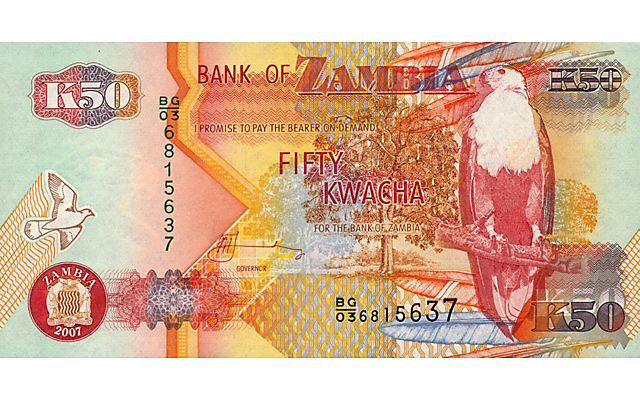 This 50-kwacha note of Zambia, issued in 2007, is among the notes the Bank of Zambia has been withdrawing from circulation.

Going, going, soon to be gone.

That’s what officials at the Bank of Zambia can soon say, having already withdrawn from circulation 97 percent of all older notes as they are replaced with notes dated 2013.

The bank expects to complete the withdrawal of all notes older than the 2013 issues within the next two months, according to bank project director Lazarus Kamanga.

In 2012 the government of Zambia decided to revalue its note denominations, because of high inflation in the Zambian economy. The decision was made to remove three zeros from the denominations, according to an article posted July 7 to the StarAfrica.com website.

New bank notes were introduced Jan. 1, 2013. The basic face and back designs of the new notes feature images similar to those found on the older notes.

The face design retains an image of the fish eagle, the national bird of the nation, and the back features an image of the famous statue called The Chain Breaker. While all of the notes share the two design themes, the colors and design focus differ by denomination.

For more information about the design changes, visit the Bank of Zambia’s website, at www.boz.zm.