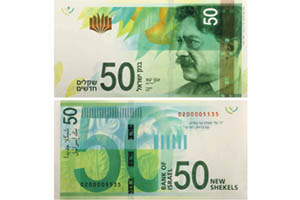 New designs for the 50-shekel note of Israel feature a portrait of poet Saul Tchernichovsky on the face. The back shows capitals of Corinthian columns in reference to parts of the poet's compositions and his translation of ancient Greek literature.

New designs for the 50-shekel notes of Israel will honor poet Saul Tchernichovsky, according to a March 2 news release from the Bank of Israel.

The face of the note features a portrait of Tchernichovsky along with images of citrus fruit and leaves. Tchernichovsky’s poem, “Oh, My Land, My Homeland,” was the inspiration for the face design. The poem contains the words “the bouquet of spring orchards.”

The Bank of Israel began providing samples to manufacturers, suppliers and operators of vending, counting, and sorting machines in February so they can begin calibrating the machines to accept the new bank note, according to a news release from the bank.

The 50-shekel note will begin showing up in circulation later this year, according to the bank’s schedule.

According to a story published March 5 in the Times of Israel, Moti Fine, the currency director for the Bank of Israel, declined to go into detail about the security features saying only that “the bank wanted to stay as far ahead of counterfeiters as possible.”