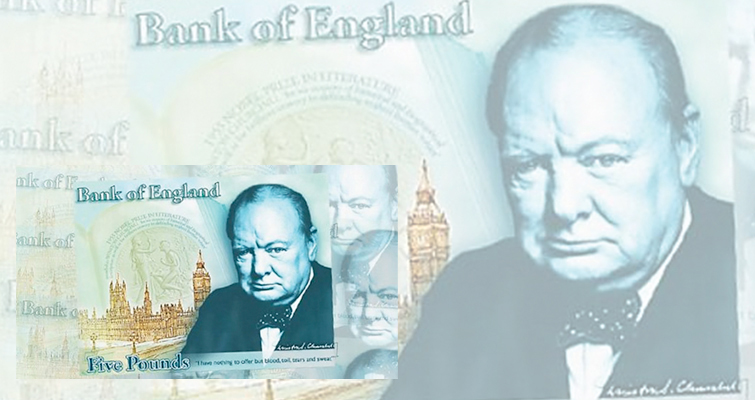 The Bank of England is in the process of redesigning its notes, with a £20 issue to depict visual artist set to appear at the end of the decade and a Winston Churchill £5 polymer note (concept shown) in 2016.

When the Bank of England decided to replace economist Adam Smith on the £20 note scheduled to enter circulation by the end of the decade, it called on the public to nominate whom his replacement should be.

The criteria for inclusion were that (1) the subject must come from the world of the visual arts who helped to shape British thought, innovation, leadership, values, and society; (2) could not be fictional; and (3) could no longer be alive. During a nomination period lasting from May 19 to July 19, 29,701 nominations were made, naming 592 eligible visual artists.

The full list, inexplicably arranged in alphabetical order by first name, is on the Bank of England’s website.

According to the bank, the final decision will be based on the strength of the nominee’s contribution and not on the number of times he or she was nominated. The bank will conduct a small number of public focus groups to give its advisory committee an understanding of likely public views. This should help it to both identify characters who would have strong public appeal and rule out some that may be divisive. It will also help discount the possibility that the nominations “could be unduly influenced by a particular segment of society.”

The committee will then reduce the initial list to a final one. Mark Carney, the bank’s governor, will choose from that list.

At the same time, the bank also announced that all future bank notes, starting with the Winston Churchill £5 polymer note in 2016, will include symbols representing all four of the home nations (England, Scotland, Wales, and Northern Ireland). This decision came after discussions with the first ministers of Wales, Scotland, and Northern Ireland. The symbols will be released at the same time as the unveiling of the new note next year.

Economist and philosopher Adam Smith is depicted on the back of the current £20 note from the Bank of England.

Existing Bank of England notes all depict Queen Elizabeth II on the face, as the reigning monarch of Great Britain.