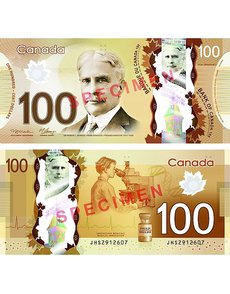 Canada’s $100 note is the first denomination to undergo a transition from paper to plastic. The new series of notes features new designs, the back of the $100 note honoring the discovery of insulin to treat diabetes, the invention of the pacemaker, and the role Canadian researchers have played in mapping the human genetic code. Sir Robert Borden, prime minister of Canada from 1911 to 1920, remains on the face of the note, in a new portrait. 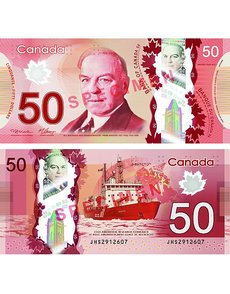 Scientific exploration is commemorated on the $50 note, which is scheduled for release in March of 2012. The back of the note features images of the Canadian Coast Guard Ship Amundsen in the North, reflecting Canada’s leading role in Arctic research. An updated portrait of William Lyon Mackenzie King, the Canadian prime minister from 1921 to 1930 and again from 1935 to 1948, is on the face of the note.

The Bank of Canada unveiled its long-awaited new polymer notes at its head office in Ottawa June 20.

Carney said: “This new series of bank notes combines innovative technology and Canadian ingenuity. They were developed by a team of physicists, chemists, engineers and other experts from the Bank of Canada and from across the bank note industry.”

Carney added: “This work was born out of necessity. Beginning in 2001, counterfeiting in Canada increased dramatically, to levels that were very high by Canadian and international standards. By 2004, counterfeiting was at a historic peak of 470 counterfeit notes detected per one million notes in circulation.”

While the current level is just 35 counterfeits detected per million notes, the Bank of Canada turned to polymer to reduce that number even more. It also turned to polymer for savings, according to Canadian officials.

Although the initial production cost of the polymer notes is higher than that of the current cotton-fiber notes, the Canadian government expects to save some $200 million over the life of the series because the polymer notes will last at least 2.5 times longer.

The workhorse of the Canadian economy, the $20 note, currently lasts about three years. Canadian officials expect the replacement polymer $20 notes to last as long as seven years.

According to Charles Spencer of the Bank of Canada Currency Department, bank notes still hold an important place in Canadian commercial transactions.

“Despite the popularity of the other means of payment, such as credit and debit cards, and electronic transfers, bank notes remain an important way for Canadians to pay for goods and services. Indeed, the total value of bank notes outstanding continues to grow in line with the overall growth of the economy and reached $57.9 billion at the end of 2010,” Spencer writes.

The new Canadian notes are being printed on what bank officials say is a well-established substrate: Guardian, manufactured by Securency International of Australia. A biaxial-oriented polypropylene substrate, Guardian has been used successfully for printing bank notes of 32 countries since 1988, according to the bank.

However, the Bank of Canada boasts that “Canada’s new notes are unlike other polymer notes.”

While clear windows have been used successfully as anti-counterfeiting devices on notes of other countries, Canada has gone a step further by combining them with a holographic foil. “The images on the foil, which is placed in a large vertical window, are large, brilliant and complex, and the details and colors can be seen clearly from both sides of the note. A second, smaller window contains a frosted area that, when viewed against a single-point light source, shows a circle of numbers matching the note’s value,” according to the Bank of Canada.

Traditional security features, such as fine-line printing and intaglio printing, which results in raised ink, are also used.

In addition to these security features, the new notes retain the features contained in the current Canadian Journey series to help the blind and partially sighted to identify notes: large numerals against contrasting backgrounds, dominant color schemes, codes that can be read by an electronic reader supplied to the blind, and a system of raised dots in a different pattern for each denomination. Improvements in this category were made in two areas: the electronic reader will now work on both ends of the notes and, thanks to the characteristics of the polymer substrate, the raised dots will last longer in circulation, according to the bank.

In discussing the designs to appear on the notes, Finance Minister Flaherty spoke about the importance of Canadians seeing their story reflected in bank note designs.

“These bank notes evoke the country’s spirit of innovation, and their designs celebrate Canada’s achievements at home, around the world and in space,” he said. “Bank notes are cultural touchstones that reflect and celebrate our Canadian experience.”

In describing the design process, Spencer writes: “… a conscious decision was made to retain those elements that worked well in earlier series. The notes are therefore the same size, to minimize their impact on note-handling equipment, and the five denominations will each be the same dominant color as in past series, to help people quickly identify each denomination.”

While the new series is currently dubbed the “Polymer series,” Flaherty indicated that it should be called the “Frontiers series” because it celebrates Canada’s achievements at the frontiers of innovation.

The $100 note, scheduled for release in November, features images that focus on Canadian innovations in the field of medicine including pioneering the discovery of insulin to treat diabetes, the invention of the pacemaker, and the role Canadian researchers have played in mapping the human genetic code.

Sir Robert Borden, prime minister of Canada from 1911 to 1920, remains on the face of the note, albeit in an updated portrait. The date of issue has been moved from the lower margin on the back of the note, to just below the “100” in the upper right corner on the face.

The $50 note, scheduled for release in March of 2012, features images of the Canadian Coast Guard Ship Amundsen in the North, reflecting Canada’s leading role in Arctic research. An updated portrait of William Lyon Mackenzie King, the Canadian prime minister from 1921 to 1930 and again from 1935 to 1948, is on the face of the note.

As for the other denominations, scheduled for release in 2013, the $20 issue will feature the Canadian National Vimy Memorial, to mark the contributions and sacrifices of Canadians in conflicts throughout history.

The $10 note will feature the train Canadian to highlight the great technical feat of linking its eastern and western frontiers by what was, at the time, the longest railway ever built.

The $5 note will feature Canadarm2 and Dextre, which symbolize Canada’s continuing contribution to the international space program through robotics innovation. ¦