Bank of Canada reveals some details about polymer notes 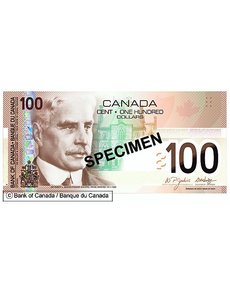 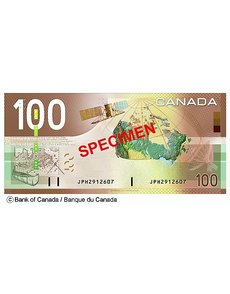 Canada’s $100 note from the current Canadian Journeys series, seen here, is getting a makeover, along with the $5, $10, $20 and $50 notes, and will soon be made of plastic.
Previous
Next

In introducing its new polymer bank notes, Canada is starting with its highest denomination.

A polymer version of the $100 note, the highest denomination still regularly circulating in Canada, will makes its debut in November, Bank of Canada officials said March 10.

Adopting the polymer technology allows the notes to include more security features, differing designs and other technological advances, according to the Bank of Canada.

In addition, though initially more costly than cotton-paper notes, polymer notes will last 250 percent longer and are better for the environment, according to the bank.

“Canada’s new bank notes will have innovative security features that are easy to verify,” said Mark Carney, governor of the Bank of Canada, in a press release. “The leading-edge technology in these notes will expand the frontiers of bank note security.”

The new $100 and $50 designs, as well as the security features, are to be unveiled in the spring, according to the Bank of Canada.

The notes will stay the same size and dominant color scheme.

The decision to switch to polymer was first announced in March 2010, under a budget drafted by Canada Minister of Finance Jim Flaherty (the budget also called for new alloys for the $1 and $2 coin).

The new polymer series of notes will replace the Canadian Journey series notes that were introduced by denomination from 2001 to 2004.

The Canadian Journey notes introduced holographic stripes and other key security features at a time when the Bank of Canada was seeking to regain the upper hand against would-be counterfeiting; the number of fake notes in circulation spiked in the middle part of the decade, when as many as 450 notes per million were found to be fakes.

Now fewer than 50 notes are fake for every million notes in circulation, according to the bank, in part because of the security measures in the Canadian Journey series. Bank officials also attribute success in reducing the number of counterfeit notes in circulation to a concerted strategy to train retailers to recognize genuine notes, to work with police and the courts to deter counterfeiting, and to improve the quality of notes in circulation.

Security features used with the Journey series will be retained, and the tactile features that help blind and partially sighted individuals to recognize the denomination will last longer, because polymer notes are more durable than cotton-paper versions, according to the bank. Crane AB currently provides the cotton-paper blend for the notes.

The electronic reader supplied to blind users will recognize a machine-readable feature on both ends of the new bank notes, according to the bank. Now, the readers can read only an unidentified feature that is located at the note’s left edge, when the face of the note faces the viewer right-side up. The bank will not disclose the feature for security concerns.

The increased durability will save “at least $200 million over the life of the series, compared with the option of adding new security features to paper-based notes,” according to the bank.

The Bank of Canada is contracting with Note Printing Australia, a subsidiary of the Reserve Bank of Australia, to supply the polymer material and license the use of security features.

An Australian company, Securency International, will provide the substrate required for making the notes, which will be printed in Canada by two private sector security printers, Canadian Bank Note Company Ltd. and BA International Inc., both based in Ottawa.

The Bank of Canada is working closely with organizations that handle bank notes in Canada, including the manufacturers of equipment that processes bank notes, such as automated teller machines, note sorters and vending or ticket machines. These entities have been consulted during the development of the notes.

The switch to polymer notes requires adjustments to machinery, “as is the case with the introduction of every new series,” according to the bank.

The increased quality of notes will make cash processing more efficient and reduce the risk of losing money from fakes, the bank noted.

Following the issue of each denomination, older notes of each respective denomination will be withdrawn from circulation but remain valid at their face value. ¦