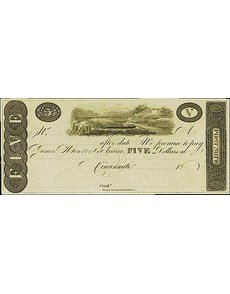 This note from Cincinnati was made payable to James Monroe, or bearer, in an effort to suggest that Monroe was somehow associated with or endorsed this bank. There is no evidence that Monroe had any connection to the bank.

Successfully circulating bank notes in antebellum America was often a result of developing the right perception.

When the reality of the situation was that your “bank” was located in the bank president’s parlor and the “safe” consisted of a steamer trunk with one lock that was broken, then marketing and salesmanship sometimes had to be employed to keep the bank away from insolvency’s door for another day, week or month.

First, simply the name of your bank might sway some folks. The Security Exchange Bank, for example, sounded a whole lot better than the Here Today Gone Tomorrow Bank.

Second, your bank notes had to portray strength and stability. Well-engraved bank notes portraying heroic allegorical figures, or even better, heroes like George Washington and Thomas Jefferson, helped to support the perception that perhaps your bank was also a solid and reputable concern.

Third, sometimes banks tried to attach to themselves endorsements from well-known personalities. One of the most common approaches was to make notes payable to famous Americans like Washington, Samuel Adams, Daniel Webster or James Monroe. The inference was that, for example, James Monroe was somehow connected with the bank since the notes were made payable to him or bearer.

In every case of which I am aware, no such relationship existed nor did the famous person have any idea that his name was being used to aid in the circulation of dubious bank notes.

Since little information was available to people who handled paper money on a daily basis, sometimes, perhaps even often, these subterfuges actually worked.

However, after having been burned a few times, the most common defense mechanism was to accept no notes from banks more than 10 or 20 miles away from home. Word-of-mouth became the first line of defense for users of bank notes.