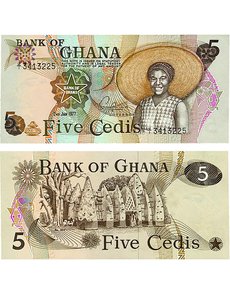 This 5-cedi note of Ghana has terrific vignettes: a woman wearing a large hat on the face of the note, and on the back some of the most interesting architecture you’ll find on world paper money.

The hobbyist who wants to combine architecture and an interest in paper money will need to exercise some discernment and discipline when making purchases.

That’s because too many notes feature drab, nondescript government buildings as the main theme.

A little focus can mean reduced spending and a collection that stands out in eye appeal and variety.

Argentina has long been recognized as the South American nation with the greatest European influence, and those ties show up in its architecture. Check out the Plaza de Mayo building in Buenos Aires on the back of the 1,000-peso notes of 1976 to 1983. This piece of currency costs less than $5 even in Crisp Uncirculated condition.

Hyperinflation destroyed Argentina’s economy in the 1980s and 1990s. The austral denomination replaced the peso, but the new currency soon lost its value.

The peso returned in 1992, and the revived 1-peso notes display the National Congress building on the back. This structure has more than a passing resemblance to the White House.

Collectors who want a second helping can obtain the Argentina 2-peso notes that feature the Mitre Museum.

In Austria, 50-schilling notes were the workhorse in the nation’s economy before the euro became the national currency.

The purple version of these notes, issued in the 1970s and 1980s, depicts the famed Burg Theater on the back. Austrian actor Ferdinand Raimund (1790 to 1836) is honored on the face of the note.

An aluminum smelting facility isn’t the kind of building that might be expected to grace a piece of paper money, but that is the overhead scene on Bahrain’s half dinar notes of 1973 to 1998.

Angkor Wat is one of the largest religious complexes ever built. Located in modern-day Cambodia, Angkor Wat dates back to the 12th century and has been used by Hindus and Buddhists.

It’s an imposing site even in its abandoned state, and a wide view of the remains can be found on the back of the 1973 100-riel notes issued by the Khmer Republic.

A vignette of Angkor Wat makes another appearance on the face of the green 5-riel notes of 1975. The newer release also features a landscaping crew on the back.

Canada’s first Parliament building is displayed in all its ornate elegance on the back of the commemorative 1867-1967 Canadian $1 notes.

This commemorative note marked the centennial of the Constitution Act that established the Dominion of Canada and nationhood for America’s northern neighbor. This note was printed in large quantities and is very inexpensive in all grades.

Built to be practical rather than artistic, a sugar refinery is shown on the back of the 1-peso notes issued from 1979 to 1988 by the Dominican Republic.

With a permanent population of approximately 2,500 plus a small military base, the Falkland Islands needs no skyscrapers.

Despite the lack of such edifices, examples of the British overseas territory’s architecture — the Christ Church cathedral in Stanley and the governor’s residence — cover the backs of the £1, £5, £10, £20 and £50 notes.

Architecture at the most basic level makes occasional appearances on paper money. There’s a tropical thatched hut on Fiji’s green 50-cent notes issued from 1968 to 1971.

The 5-cedi notes of Ghana, issued from 1973 to 1978, have a terrific vignette of a woman wearing a large hat on the face of the note.

The real architectural prize is the vignette of conical native huts on the back, a view of some of the most intriguing architecture you’ll find on world paper money.

The well-known Quetzalcoatl pyramid dominates the back of the Mexican 20-peso notes issued from 1972 to 1977.

Here’s how to become a millionaire and have something of architectural merit all at once:

Peru’s 1-million-inti notes of 1990 include a view of the classically styled medical college at San Fernando.

While many of the buildings that appear on world paper money are nothing special to those who appreciate creative design, a fair number of notes carry vignettes that nicely display the talents of great architects and local ingenuity.