'Anchors aweigh' may be the reaction to battleship on note 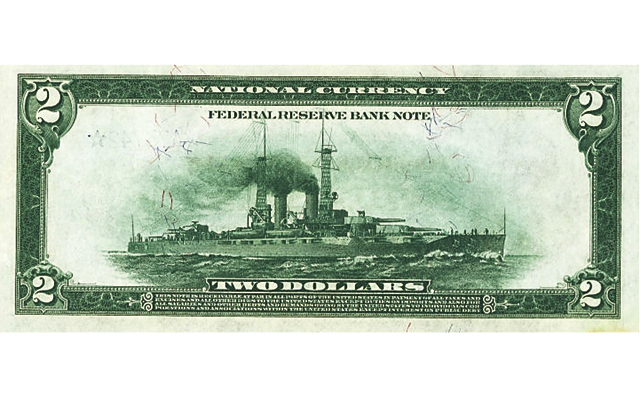 The back of the Series 1918 $2 Federal Reserve Bank note displays a vignette well-known to most collectors. The USS New York served in World War I and World War II with honor.

On occasion, it’s good to review the basic information surrounding paper money, even what is fairly well known to the collecting community.

Although I don’t own an example of the “Battleship note,” that fact has not deterred me from having an appreciation for it. Of course I’m referring to the Series 1918 $2 Federal Reserve Bank note.

The note has always been popular with collectors and noncollectors alike for its back design, which features a wonderful vignette of a World War I-vintage battleship.

The New York had an interesting service record. It first served as the flagship of the squadron blockading Veracruz, Mexico, in an effort to prevent arms shipments from dictator Victoriano Huerta.

The ship’s service in World War I was limited to blockade and escort duty, reinforcing the British Grand Fleet in the North Sea. But the New York was actually credited with sinking a German submarine after inadvertently colliding with it less than a month before the end of the war.

During the interwar years, the ship operated in primarily training and patrol roles and was updated and refitted prior to the beginning of World War II.

After participating in the North African invasion efforts, the New York reverted to a training role until 1945 when it was chosen to participate in the invasions of Iwo Jima and Okinawa in the Pacific Ocean.

After World War II, the New York was one of the ships used in the Bikini Atoll atomic tests in 1946. It survived both blasts.

The end came unceremoniously on July 8, 1948, 40 miles southwest of Pearl Harbor, when the New York, serving in its final role as a target vessel, was sunk by naval aircraft and gunfire.

Perhaps not a storybook ending, but the New York did everything that it was asked to do during an honorable service.