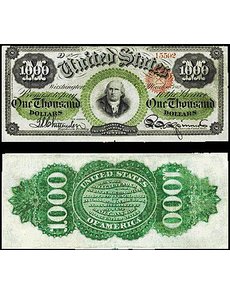 The American Numismatic Association World’s Fair of Money, held Aug. 13 to 17 in Rosemont, Ill., is indeed a “money show” and not just a “coin convention” anymore as some have referred to it.

The attendance of dozens of paper money dealers, and many dealers for whom paper money is only a part of their business, combined to confirm a strong and rising paper money market.

It shows that the market is one in which the owners of top material are once again willing to consign their holdings. The results of the official ANA World’s Fair of Money paper money auction conducted by Stack’s Bowers Galleries confirm it.

Showing that rarity can transcend condition was a Series 1878 $20 silver certificate (F-306) graded PCGS Currency Fine 15 Apparent for restorations and trimmed edges. It is one of only three known and also the only one not in government hands. It sold for $85,187.50.

Another Friedberg number not seen in five years was a Series 1863 $20 interest-bearing note (F-197) sold for $82,250. No notes of this type are graded higher than the VF-35 that PCGS Currency awarded this example.

However, not all of the rarities expected to bring high prices in the auction were sold.

Among them was a Series 1864 $50 compound-interest Treasury note (F-192b), PCGS Currency Very Fine 30. Even though it was making its first auction appearance since 2008, it did not sell.

One of several gold certificates offered, considered the finest known Series 1905 $20 gold certificate (F-1180), graded PCGS Currency Superb Gem New 67 Premium Paper Quality, also did not sell. This type of note bears the nickname “Technicolor note” because of the use of gold, red and black inks that give the viewer a feel for the vividness of the color. ¦