ANA auction results do not disappoint 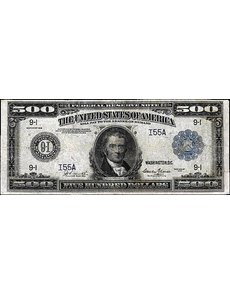 The auction, conducted at the American Numismatic Association World’s Fair of Money, offered more than 900 lots of U.S. paper money with a number of notes selling for prices that were reminiscent of the market of several years ago.

The highlight was the “Watermelon Collection of Large-Size Type Notes.” The collection gets its name from one of its highlights, the famous Series 1890 $100 Treasury note, Friedberg 377 (Paper Money of the United States by Arthur L. and Ira S. Friedberg). The name comes from the shapes of the zeros on the back, which resemble watermelons.

The $100 Treasury note, graded PCGS Currency Fine 15, sold for $77,625 while a Series 1934 $10,000 Federal Reserve note, F-2231A, graded Paper Money Guaranty About Uncirculated 55, sold for $80,500.
Looking forward, the auction scene will continue to make news in September. First up is an impressive collection of Federal Reserve Bank notes and Federal Reserve notes, which will be offered by Lyn Knight Currency Auctions Sept. 12 and 13 at the firm’s headquarters in Kansas.

These notes are part of the Rickey Collection, a large and impressive assemblage, of which Knight has offered other components in the past.

Certain Federal Reserve Bank notes and Federal Reserve notes only became recognized for their actual rarity relatively recently, and they show why a statistic such as “notes printed” is often misleading — not taking into account the number of notes redeemed. While this is especially true for FRBNs, it has resulted in some impressive rarities among the FRNs (red and blue seals), as well.

Another section of the two-day event will contain the Augusta Collection, an offering of 135 error notes including a $5/$10 double-denomination 1934-D Kansas City Federal Reserve note.