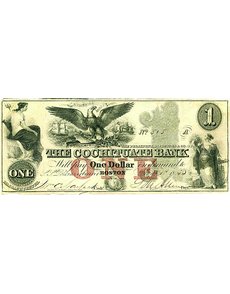 An attractive and affordable $1 note of the Cochituate Bank of Boston, dated Jan. 1, 1853, is signed by the bank’s cashier and its president.

Several years ago David N., a collector, asked for advice on what to collect in the field known as “obsolete currency.” Loosely defined, this series comprises bills issued by state-chartered banks from 1782 until 1866.

After the Revolution, Continental Currency paper money was devalued to the point of near worthlessness. The fledgling United States Congress had issued bills to pay soldiers and other expenses. Although they were redeemable in “Spanish milled dollars,” these being silver coins of Spain and Latin America (as no federal coinage was available at the time), the Treasury simply did not have coins to exchange for them.

In the 1780s, it was not feasible for our new government to issue paper money as it would face certain rejection. Filling the gap were the individual states in the Union. Various investors and others formed groups, raised capital and applied for banking charters. These were granted by the various legislatures.

There was virtually no oversight in the early days, and while some banks were professionally and honestly run, others were fraudulent. Beginning in the late 1830s various banking commissions were set up, alleviating the problem to an extent. Of the 40 or so banks in Michigan set up prior to 1840, only a handful were honestly run. In contrast, most institutions in the Northeast were sound.

In time, old designs were replaced by new, creating what were probably 50,000 or so different designs, denominations and varieties. Beginning in 1863, Uncle Sam issued national bank notes, which generally supplanted the state issues. To promote their circulation, the government placed a 10 percent tax on transactions using state notes, beginning on July 1, 1866, sounding the death knell for their circulation.

My book, Obsolete Paper Money Issued by Banks in the United States 1782-1866, published by Whitman in 2005, has been very popular. You might want to borrow or buy a copy.

I recommended to David N. that, for starters, he try to acquire one of each different note he could find, in grades of Fine to Extremely Fine, with ink signatures of the bank officers, in price ranges from, say, $25 to $100 or so. Many of these are very scarce. Later, he could investigate more esoteric series. He followed my advice and has built a fine collection. Food for thought.