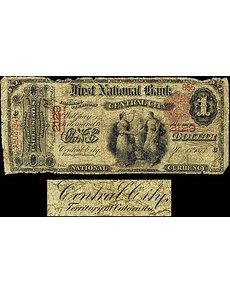 The only known federal $1 national bank note issued in Colorado Territory by the First National Bank of Central City was acquired by Q. David Bowers for $5,500 at the recent Whitman Expo.

One thing about numismatics is that there is always something new to be discovered.

This challenge continually helps advanced collectors to move from a complete or nearly complete specialty to a new area. Someone who finishes a set of Walking Liberty half dollars from 1916 to 1947 does not retire from coin collecting. Instead that collector pores through A Guide Book of United States Coins or some other reference, or perhaps sees something in an auction catalog that piques an interest — and off he or she goes.

In contrast, in these noncoin series grading is important but is not a prime focus. Prices by comparison are often incredible bargains, grade for grade.

For paper money, for many varieties the finest known example may be only Good or Very Good. And yet, such are in tremendous demand. Ditto for Colonial coins. Just two 1714 Gloucester (Virginia) shillings are known, both of which are well worn and have part of the inscriptions missing. The Guide Book (see page 48) estimates the value as $120,000.

The point of this week’s column is that although high grade is always desirable, thousands of varieties of tokens and currency notes exist only in lower grades — and with many enthusiasts eagerly chasing them.

I illustrate a note I purchased from Tom Denly for $5,500 at the recent Whitman Coins & Collectibles Expo in Baltimore. I suggest that it grades Good 4. It is from the First National Bank of Central City, Colorado Territory, a Wild West rip-roaring gold mining town.

It is the only known federal $1 bill of its type from this bank, a brand new discovery, according to expert Tom Denly (though $1 notes are known from other Colorado Territorial national banks). I am not sure what I will do with it, but I had to buy it as I had never seen or heard of such before.

Q. David Bowers is chairman emeritus of Stack’s Bowers Galleries and numismatic director of Whitman Publishing LLC. He can be reached at his private email, qdbarchive@metrocast.net,
or at Q. David Bowers LLC, Box 1804, Wolfeboro, NH 03894.