Indiana obsolete bank notes not the work of charlatans 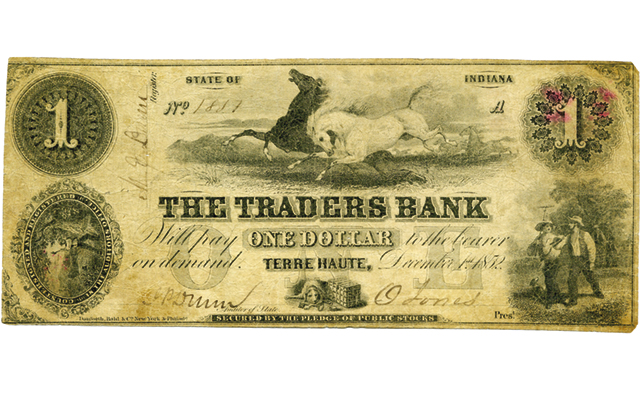 I have always had a fascination with altered obsolete bank notes. In the normal course of things, these notes were originally used by banks that later failed.

The bank notes were then bought up by charlatans for the value of the paper and mechanically altered so that they appeared to be the issues of one or more other banks that were still in business.

The success of this deception hinged on two facts.

First, hundreds, if not thousands, of different designs were in circulation, with more being added every day.

Second, information regarding various flimflams was very slow in getting out to the public. By the time an altered note had been discovered and its existence became general knowledge, the damage had usually long been done, and the “artist” had moved on to creating different “masterpieces” for different banks from his stack of worthless notes.

At first blush, that seems to be what happened with the Traders Bank, which is known with common designs from Indianapolis, Nashville, and Terre Haute, all in Indiana.

It might appear that some scalawag altered notes from the Terre Haute location and through the magic of artistry turned them into issues of the same named bank in two other Hoosier towns. Except that’s not what happened.

There seems to be no common thread between the three locations in terms of officers, and so this was not a case of a bank simply moving twice. It seems the state was willing to work out a deal where plates from a bank that no longer had any need for them could be recycled for use by a new bank.

While this was not the only instance when this happened in Indiana, it was quite unusual nonetheless.