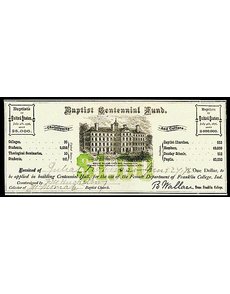 A detailed vignette of a building — worthy of any piece of paper money — appears on this 1876 uniface receipt provided to the donor of $1 to a building fund drive for an Indiana college.

Sometimes you find items that you desperately want to be paper money but that just don’t quite make the cut.

In looking through some of my scanned images I came across such an item. It is a $1 receipt for a donation to Franklin College to build Centennial Hall in 1876.

This “near-note” is really appealing to me because Franklin College, a small liberal arts institution, is alive and well and located in a small Johnson County town of the same name, not more than eight miles from where I live.

Today, it has about 1,000 students and offers 36 majors, 39 minors and 11 pre-professional programs. Athletics also has a place, and the college’s football team, the Grizzlies, is in the Division III play-offs this year.

The school was founded in 1834 and, in 1842, became one of the first U.S. institutions of higher learning to admit women.

The college actually suspended operations for a brief period of time in 1872 due to financial difficulties. It was revived later in that same year, rescued by the Franklin College Association, whose members, mostly local citizens and church members, subscribed more than $51,000 in stock.

That generosity allowed the association to retire old debt and purchase the school’s buildings and property at the sheriff’s sale. The college reopened in September 1872 and has been in operation ever since.

The $1 receipt was issued in 1876, acknowledging an individual’s contribution to the building fund for “Centennial Hall,” which was intended to be used by the “Female Department.”

A vignette of the Rhode Island College, built in 1770, appears in the center of the face of the receipt. It was apparently selected to inspire contributors, as this building was noted on the receipt as being the “only college building of American Baptists in 1776.”

This date is significant as the fund drive was being conducted during the nation’s Centennial of Independence celebration.

As an aside, according to college sources, they never constructed Centennial Hall, but they gave the fund drive a “heck” of an effort.