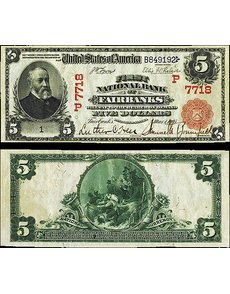 A Series of 1902 $5 National Bank Note issued in 1905 by the First National Bank of Fairbanks, Alaska, and given to the city’s namesake, Vice President Charles W. Fairbanks, is expected to sell for $200,000 or more in an Oct. 18 sale conducted by Heritage Auctions.

A $5 Series of 1902 National Bank Note from Fairbanks, Alaska, originally given to the city’s namesake, is expected to sell for $200,000 or more in an Oct. 18 Heritage Auctions sale in Dallas.

“The historic note is printed with serial number 1 and it has been in the family’s possession since Charles W. Fairbanks received it from the First National Bank of Fairbanks when it was issued in 1905,” said Dustin Johnston, currency auctions director at Heritage.

“It’s a piece of Fairbanks history you can hold in your hands. It’s probably the most important Alaska National Bank Note in terms of pedigree and with ties to some of the most significant individuals in the early history of the city of Fairbanks,” Johnston stated.

The $5 note was personally handsigned by the bank’s president and co-founder, Samuel Bonnifield, a well-known professional gambler of the era who was nicknamed “Square Sam.” The note was also signed by the bank’s cashier, prominent Fairbanks lawyer Luther C. Hess, who also served as a U.S. district attorney and Alaska territorial legislator.

Charles Warren Fairbanks (1852 to 1918) was a U.S. senator from Indiana who served as vice president under President Theodore Roosevelt from 1905 to 1909. His great-grandson, Charles W. Fairbanks IV, recently recalled that while growing up in Pasadena, Calif., his father, Charles W. Fairbanks III, kept the $5 note in a frame “for everyone to see” in the den of their house.

“I’ve lived with it for 67 years,” the great-grandson stated.

For the past few years the note has been kept in a bank safe deposit box, and now the Fairbanks heirs have consigned it to the auction.

“My feeling is that it should be with someone who understands it and will care for it. It does the world more good by being out there than it does sitting in a safe deposit box,” Fairbanks explained.

Starting during the Civil War and continuing into the early 20th century, private banks could be become federally chartered national banks. Banks would deposit funds with the U.S. Treasury and receive national banks notes printed with the bank’s name and charter number on them.

First note from the first sheet

The Red Seal, Series of 1902 $5 note features a portrait of President Benjamin Harrison on its face and a Landing of the Pilgrims vignette on its back. It is cataloged as Friedberg 587 in Paper Money of the United States, by Arthur L. and Ira S. Friedberg.

It has been graded Apparent Choice New 63 by PCGS Currency. The note’s encapsulation states “Minor Restorations on Back in Corners.”

The note is being offered as Lot 15418 in Session Two of the Heritage auction, held in conjunction with the American Numismatic Association National Money Show scheduled for Oct. 18 to 20 in Dallas.

Heritage will conduct the auction in Dallas and online.

For additional information on this sale, contact Heritage Auctions by telephone at 800-872-6467 or visit the Heritage website online at www.HA.com. ¦