A tiny reminder of Germany 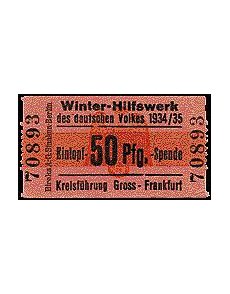 The 50-pfennig chit shown was apparently purchased as a donation in Frankfurt during the 1934-1935 campaign of Winterhilfswerk, the public welfare program run by the German government annually during the fall and winter between 1933 and the end of the war. The donation amounted to about 20 cents.

When someone talks about the numismatic aspects of Nazi Germany before and during World War II, most collectors conjure up visions of rather drab coins made out of base metals and only slightly more attractive paper money.

Servicemen returning from Europe often brought examples back as souvenirs, assuring that most would be readily available for modern day collectors who had an interest.

One area that has escaped attention is that of numismatic and near-numismatic items associated with the Winterhilfswerk, or WHW, public welfare program operated by the German government annually during the fall and winter between 1933 and the end of the war.

The program’s stated goal was that “None shall starve or freeze” during the winter. While public participation was theoretically voluntary, the pressure to donate was unrelenting, with roving bands of donation collectors (often children) seemingly scouring every street corner and every block of every street for more donations.

Lotteries for the WHW effort were also held, with tickets sold for the equivalent of about 20 cents.

One of the most unusual ways to raise money was the Nazi practice of having so-called “One Pot Sundays” or “Stew Sundays.”

Once a month families were encouraged to have a simple “one pot” meal and donate the money saved to the WHW program. The “stew donation” (“Eintopf Spende”) 50-pfennig chit shown with this column was apparently purchased as a donation to the cause in Frankfurt during the 1934-1935 campaign. This donation amounted to about 20 cents.

These Stew Sundays were apparently not universally popular (at least privately).

“On Saturday evenings, when the Chancellor speaks,

“Then old Göring will pull a long face

“Come, Adolph Hitler, and hear what we crave:

“The food you have promised and not what you gave.

“We can’t go on living on spuds and on herring,

“But we do want to live like Goebbels and Göring.”

Uttering either one of these little ditties in public would have probably landed the speaker in a “re-education” camp, but humor often transcends all perils.