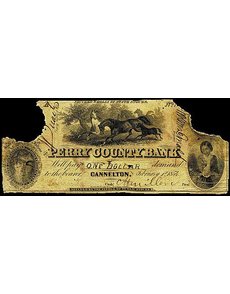 The illustrated Feb. 1, 1854, note from the Perry County Bank in Cannelton, Ind., was originally issued as a $1 note, illegally altered to become a $5 note, then devalued to its original $1 denomination.

I’ve been collecting paper money for more than 50 years and still run across the most unusual things from time to time. But nothing in recent memory has topped an Indiana note that reader John Winter shared with me recently.

Collectors are aware of many instances of genuine antebellum obsolete notes being “raised” so that they appeared to be larger denominations on the same bank.

For example, a criminal would take a genuine $1 note on the Farmers Bank and change its appearance by eradicating any references to “1” or “one” on the note and replacing them with a “5” or “V” or “five.”

Sometimes the new higher values were simply pasted over the old, and sometimes simple plates were used to print the new higher denominations in place of erased lower values.

Notes from failed banks were often bought up for not much more than scrap paper value, for “parts,” such as denominational counters and text. Deception was aided by the facts that thousands of different notes were in circulation and that information about such frauds was usually slow in traveling.

Casual money handlers simply had no chance to know what was good and what was not.

Mr. Winter’s note started out life as a genuine $1 note on Perry County Bank of Cannelton, Ind. A short time after its entrance into circulation, a sharper pasted a “V” and a “5” or perhaps two 5s in the upper corners of the note and pasted a small rectangular tablet containing FIVE DOLLARS over a similar device with ONE DOLLAR at the appropriate place in the note’s text (there are records of such alterations on this bank).

Thus, the criminal achieved a $4 profit ($5 - $1) if he could successfully pass the note. But that’s not how Winter’s note ended up. It is clear that someone intentionally removed both top corners of the note to get rid of the two 5 / V counters. The user then peeled off the FIVE DOLLARS tablet and wrote ONE DOLLAR in by hand.

So the note bears the unique distinction of being first raised from $1 to $5 and then lowered back to $1 again. Motivation for the devaluation from $5 to $1 is hard to understand. About the only scenario I can think of is that the devaluer decided that, as a raised note, it would not be redeemed for anything, while a badly damaged $1 note might at least return face value to its owner. I’d love to hear from anyone else who has ever seen anything like this.