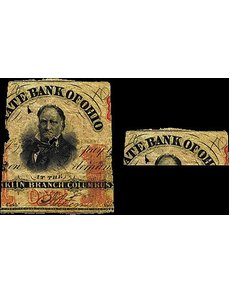 A portion of a $1 note issued by the Franklin Branch (Columbus) of the State Bank of Ohio is an example of what the author calls a “whatzzit.” Close-up detail, above right, shows the penciled in pair of numeral 10s. One explanation for why the note was cut is that it was found years after the note was issued, and the finder, having no idea that it had any value, used the portions as play money.

One of the joys of collecting obsolete paper money is the occasional discovery of what I call “whatzzits.”

Whatzzits are notes or remnants of notes that do not seem to have any purpose, at least as we normally understand the use of bank notes and scrip. My good friend and fellow Coin World columnist Gerry Tebben gave me a neat little whatzzit last year that I have puzzled over ever since.

It’s the center third of a $1 note issued by the Franklin Branch (Columbus) of the State Bank of Ohio with the numeral “10” penciled in on the upper corners of both the face and the back.

The Franklin Branch was one of 41 branches that were established across the state and one of two branches operating in Columbus. It opened in 1845 and became the Franklin National Bank (charter number 599) in late 1864. A portrait of Hosea Williams, who was president of the nearby branch in Delaware, Ohio, appears on this denomination.

The host note obviously saw extensive circulation. If this note was cut up (the left and right edges were clearly cut rather than torn) before being redeemed, then the redemption value of the note was sacrificed for seemingly no reason.

The only scenario that seems to work is that this note was found years after it was issued and the finder had no idea that it had any value. In this case, perhaps the note was considered so much scrap paper and used for three pieces of 10 cents each or $10 play money.

Notes that the State Bank of Ohio did redeem were usually punch or slit canceled and then burned. It would seem improbable that this note was simply cut into thirds for cancelation, with the remnants remaining intact. After all, in theory, discarded thirds could be “reunited” and presented for redemption again. I have seen any number of issued canceled notes on the bank that escaped burning, but never one like this.

Perhaps workers used remnants of notes that were redeemed as “tabs” to show how many sheets or notes were in a stack awaiting destruction or issue. I have an unissued strip that I think may have been used for this purpose.

But why use an issued note? We’ll never know the answer, and that’s half the fun, isn’t it?