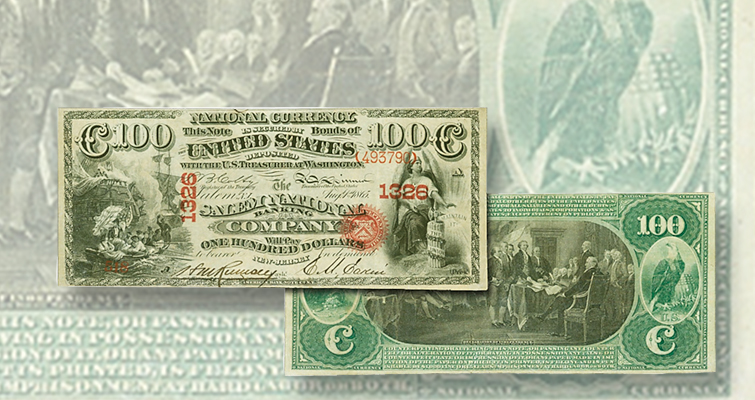 A very rare Original Series $100 national bank note (Friedberg 454a) is at the forefront of a cache of never-before-seen notes from the Salem National Banking Company (New Jersey) featured in Stack’s Bowers Galleries’ Official Currency Auction of the American Numismatic Association World’s Fair of Money this August in Anaheim, Calif. The auctioneer says that only about 40 Original Series notes are known of this denomination and this is the first one ever from the state of New Jersey.

The bank (Charter Number 1326) issued less than $3 million worth of notes in total, of which only 575 were $100 notes, all of the Original Series. The example being auctioned in August is graded Very Fine 35 Net by PMG with some restoration. It is described as having only moderate circulation, with bright paper and boldly inked design elements including the red overprint of serial number 518. It is estimated at $80,000 to $120,000.

Also being offered from the same group of Salem notes are several Original Series and Series of 1875 $5 and $10 notes, as well as a $10 Brown Back from the bank and a serial number 1 sheet of 1929 Type-1 $5 notes from the same issuer.

As is common with so many discovery nationals, the notes being sold in Anaheim have a connection to an employee of the bank. In this case, they were bought at face value by a family member of the consignor who worked in banking in New Jersey in the 1960s. The man participated in the former national bank’s acquisition and during an audit of its vault, these old and odd-looking notes were discovered. He was able to buy them and hold on to them for the next 40 years.

More information is available at www.stacksBowers.com, by phone  at 800-458-4646 or by email to currency specialist Brad Ciociola at bciociola@stacksbowers.com or director of currency Peter Treglia at petert@stacksbowers.com. 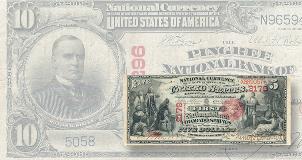 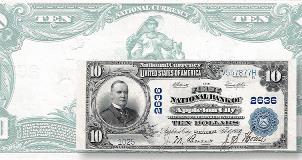 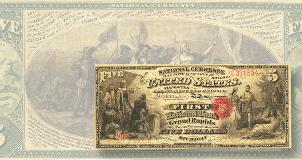