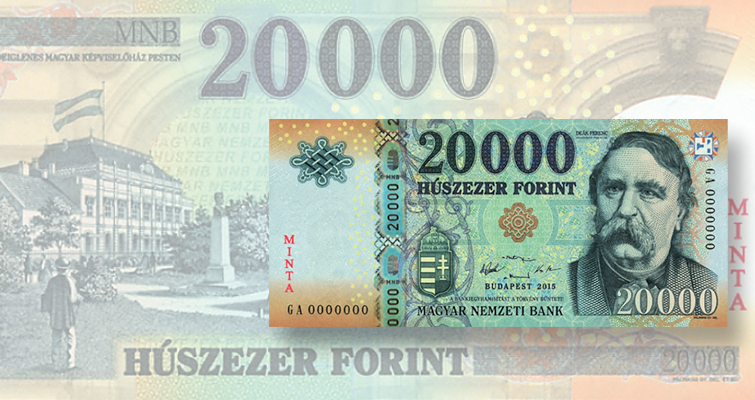 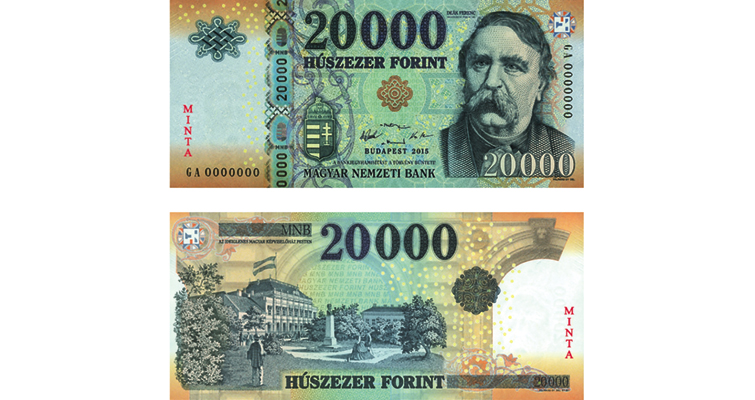 Hungary is releasing a refreshed version of its 20,000-forint note with different colors and enhanced anti-counterfeiting technology. 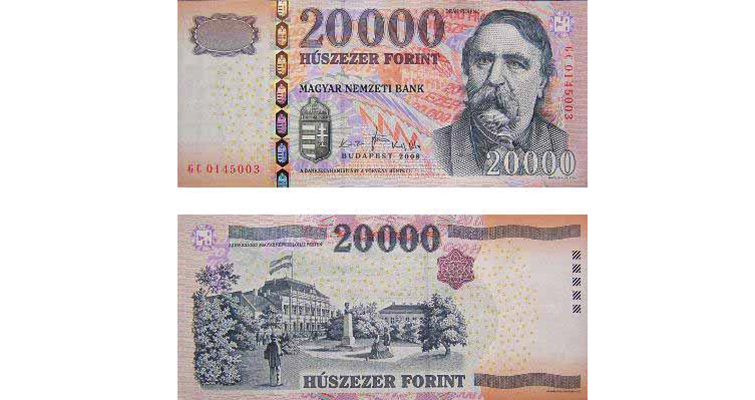 This is Hungary's current 20,000-forint note. It is being replaced with a new version with different colors and enhanced anti-counterfeiting technology.

The National Bank of Hungary (Magyar Nemzeti Bank) announced a new 20,000-forint bank note in a decree published in the Hungarian Official Journal on Sept. 25. This is the highest value Hungarian bank note, currently worth approximately $73 U.S.

The note will keep its predecessor’s 154- by 70-millimeter size and the basic design that was first issued in 2001 with a 1999 date. The most obvious difference in the new note is a change in its central color to a greenish-blue from a reddish-gray.

The portrait of legendary 19th century statesman Ferenc Deák (1803 to 1876) will remain on the face side, as will the old House of Commons in Pest on the back. Deák, known as the “Sage of Hungary,” was a leading fighter for improvement in the conditions of the Hungarian peasantry, and the architect of the Compromise of 1867 that led to union between Austria and Hungary under Emperor Franz Joseph.\

According to Hungary’s central bank, this is the 20,000-forint note’s third iteration. The second was in 2009, when the main changes were the addition of the yellow rings of the Eurion Constellation and new security elements within the watermark and elsewhere.

The notes have had the usual panoply of modern security features ever since their inception: Intaglio and microprinting, security thread and fibers, a see-through register, ultraviolet features, fluorescence, optically variable ink, and holographic foil. An addition for 2015 is iridescent printing.

The new note will be put into circulation in mid-December, at which time the bank will offer specimen and low-numbered notes for sale.

Hungary’s bank note paper is made from cotton and is manufactured by Diósgyor Paper Mill Ltd. Notes are printed by the Hungarian Banknote Printing Shareholding Company and designed by Károly Vagyóczky. 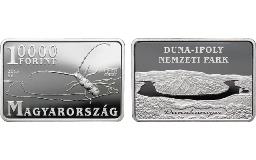 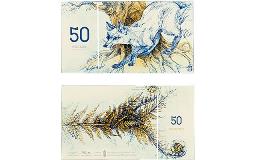 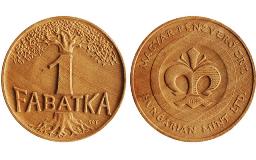