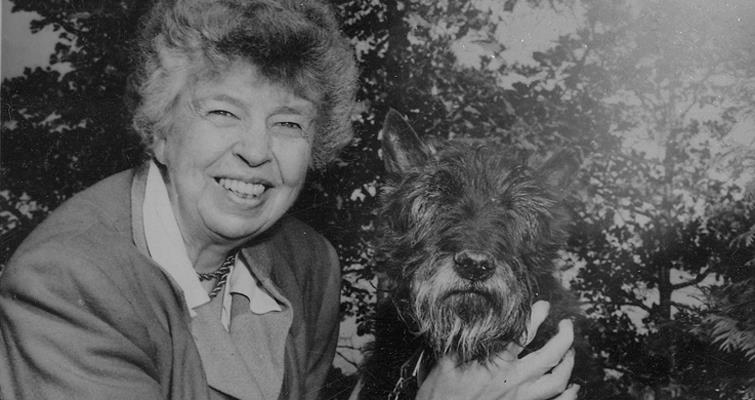 Eleanor Roosevelt, pictured here with dog Fala in 1951, is certainly a contender to be the woman placed on the new $10 bill in 2020.

After a spring that saw Harriet Tubman become the popular choice to have her portrait placed on circulating U.S. paper money, Eleanor Roosevelt has become a contender during the summer.

Roosevelt topped Tubman in a McClatchey-Marist poll on the subject, with the wife of President Franklin D. Roosevelt garnering 27 percent of 1,249 votes cast. Tubman, the famed abolitionist and pioneer of the Underground Railroad, was supported by 17 percent of respondents, while Sacagawea was third with 13 percent.

Amelia Earhart (11 percent), Susan B. Anthony (11 percent), and Sandra Day O'Connor (4 percent) were the other three choices posed to voters.

The results of the poll, which have no official bearing on which woman will appear on the $10 bill, were released on Aug. 5.

"About one in three women, 33%, selects Mrs. Roosevelt," a MaristPoll.com release summarizing the results reads. "Harriet Tubman comes in a distant second among this group with 18%.  By more than two-to-one, Harriet Tubman, 47%, is the leading choice of African Americans."

Read more about putting a woman on the $10 bill:

U.S. Treasury Secretary Jacob Lew announced on June 17 that his department is planning to place a woman's portrait on the $10 bill beginning in 2020.
That announcement came after the Women On 20s movement received national attention during the spring with its online poll to determine which U.S. woman should replace Andrew Jackson on the $20.
Tubman was the winner of that poll, with Roosevelt finishing second.