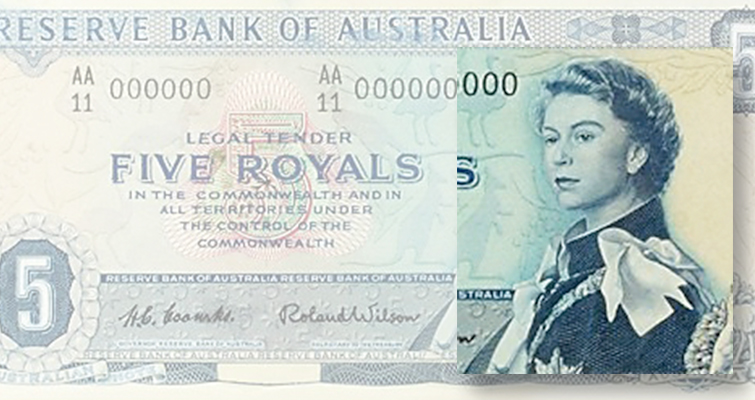 A 1960s era original artist’s assay of a proposed “Five Royals” denomination with Queen Elizabeth on the face is available. 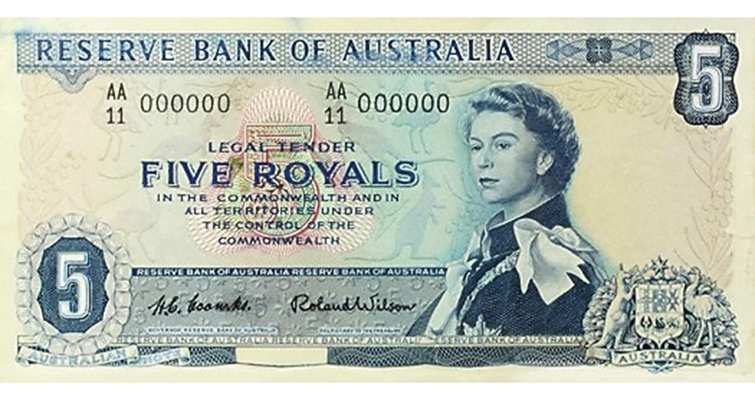 The work of three Australian graphic designers, Bruce Weatherhead, Bruce Stewart, and Max Robinson, form the basis of a different form of paper money collecting introduced recently by Universal Coin Co. of Melbourne, Australia. Called the Banknote Designers Collection, it is an assemblage of 67 examples of die proofs, essays, and concepts for Australian currency that are for sale.

Among the intriguing designs are some concepts for the 1995 $50 polymer issue by Bruce Weatherhead (1939 to 2011), one of the fathers of modern Australian graphic design (his foray into currency design seems almost an afterthought to his main body of work). His proposal featured explorer Sir Paul Edmund de Strzelecki and the 19th century Tasmanian icon Lady Jane Franklin.

Bruce Stewart designed the $5 note issued in 1992 as well as the $100 note issued in May 1996. The $100 note has portraits of the soprano Dame Nellie Melba and World War I era civil engineer and military commander Sir John Monash. Four prototypes of the $100 note quite different from his final version are offered.

A prodigious selection of 47 examples of the work of Max Robinson rounds out the collection. Robinson is responsible for the current $10 note, for which two final stage drawings are included. The others are proposals for the $5 and $100 denominations.

Asking prices range from $150 Australian ($110 U.S.) to $145,000 Australian ($106,000 U.S.) for an earlier item, a 1960s era original artist’s assay of a proposed “Five Royals” denomination with Queen Elizabeth on the face. The “royal” is an interesting and very short-lived denomination. The name was one of the proposals in 1963 for the name of the new decimal currency slated to debut in 1966. The name was met with as much as 95 percent disapproval and outright scorn and was quickly rejected in favor of the “dollar.” This note is one of its few physical manifestations.

The entire collection may be found online.