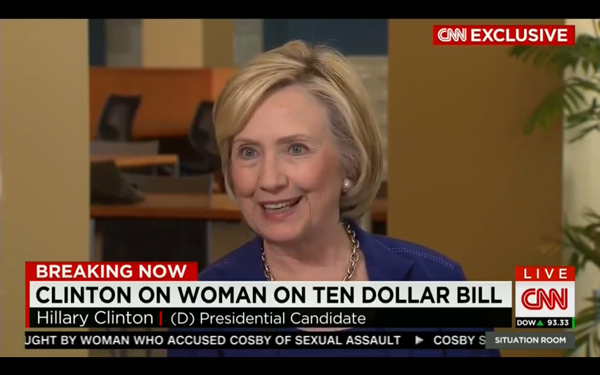 Democratic presidential candidate Hillary Clinton talked about the idea of a woman being put on the $10 bill in an interview with CNN.

Hillary Clinton wants to see a woman on a Federal Reserve note, but she doesn't want the woman to share space with Alexander Hamilton on the $10 bill, and she's not even sure if that's the right bill to change, the Democratic candidate for president said in an interview with CNN's Brianna Keilar Tuesday.

Clinton said she does not like the idea that, if indeed it is the $10 bill that a woman's portrait appears on, it be a shared-space situation where Andrew Hamilton's portrait is still included.

"That sounds pretty second-class to me," Clinton said.

Treasury Secretary Jacob J. Lew announced last month that a newly designed $10 bill featuring a woman's portrait will be introduced in 2020, in time to mark the centennial of the passage of the 19th amendment, which gave women the right to vote.

However, the bill won't be the woman's alone.

"While the design process is complex and much work remains to be done, Secretary Lew has made clear that the image of Alexander Hamilton will remain part of the $10 note," Treasury's TheNew10.com website reads. "There are many options for continuing to honor Hamilton. While one option is producing two bills, we are exploring a variety of possibilities."

The "driving conideration" behind any new design, the website reads, would be security requirements, which speaks to why the $10 was selected and not the $20 bill as was targeted by the Women On 20s campaign due to Andrew Jackson's less-than-sterling reputation in his treatment of Native Americans.

"When recommending a note for redesign, the Advanced Counterfeit Deterrence (ACD) Steering Committee considers these primary goals: that U.S. currency utilizes unique and technologically advanced security features to deter counterfeiting, that it facilitates the public’s use and authentication, provides accessibility and usability, and maintains public confidence," TheNew10.com reads. "Based on analysis of these criteria, in June 2013, the Committee recommended that the $10 note should be the next note to be redesigned, assuming no other counterfeit threats emerge."

Here's a clip of the CNN interview pertaining to the $10 bill conversation, courtesy of The Huffington Post.