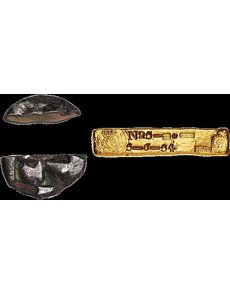 Among items to be displayed in the “Signs of Inflation” exhibit beginning March 30 at the Federal Reserve Bank of New York are, left, a plated counterfeit Greek silver drachm of Neapolis (circa 450 B.C.), sliced in half to reveal the plating over a base metal core; and above, a 23.25 karat 1830-dated gold ingot, produced in Brazil between 1778 and 1833 as pseudo-monetary objects. The ingot, issued under the reign of Pedro I, depicts the crowned arms of Portugal.

The American Numismatic Society, in conjunction with the Federal Reserve Bank of New York, has mounted a new exhibit, “Signs of Inflation,” that will make its debut March 30, by appointment only, at the bank, located at 33 Liberty St., in New York City.

The exhibition will investigate the historical perspectives and concepts of inflation as revealed through coins and other objects.

The new display at the Federal Reserve Bank of New York joins the ANS’s long-running exhibit, “Drachmas, Doubloons & Dollars: The History of Money.” That exhibit features more than 800 items from the ANS collection and other sources, including a 1787 Brasher doubloon, an 1804 Draped Bust dollar, an 1861 Confederate half dollar, and the purported King Farouk example of 1933 Saint-Gaudens gold $20 double eagle, the only example legal to own.

The new “Signs of Inflation” exhibit explores the world of inflation through the material, cultural, political, financial and artistic aspects of the nearly 200 objects on display, ranging from the seventh century B.C. to contemporary moneys, with pieces in the form of shell money, spades, ingots; wood, plastic and metal coins; and bank notes, IOUs and related objects.

Other items included in the exhibit will range from Roman silver coins in decreasing sizes, weights and metal quality, during the fourth century A.D., to 20th century items representing numerous inflationary periods, including the Weimar Republic and the Republic of Yugoslavia’s last years of existence.

Highlights of the new exhibit include the highest denomination note ever issued — a 1946 Hungarian bank note with 21 zeros, as well as the highest number of zeros effectively visible on a bank note, the $100,000,000,000,000 bill issued in Zimbabwe in 2008.

Visitors will be able to view the very rare Series 1934 gold certificates whose denominations reached as high as $100,000 while there was no inflation at all.

The exhibition also explores some other forms of inflation, like the cowrie moneys and Kissi pennies that flooded 19th and 20th century Western Africa.

Due to security measures enacted in consideration of Occupy Wall Street, all visitors are required to make an appointment to visit both ANS exhibitions at the Federal Reserve Bank of New York. Contact Joanne Isaac, ANS Museum Administrator, by phone at 212-571-4470, Ext. 112, or by email at isaac@numismatics.org, to arrange a reservation. ¦