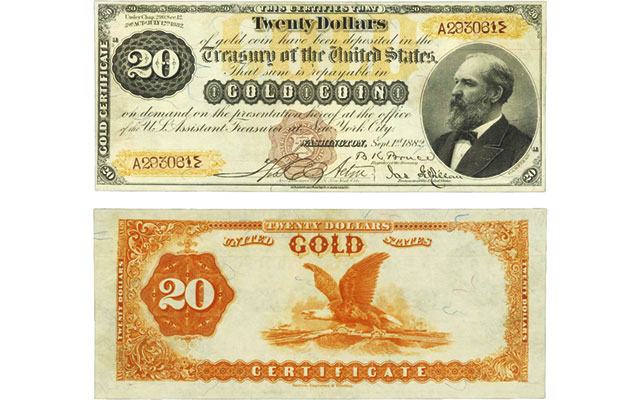 Between the Baltimore expo auction held by Stack’s Bowers Galleries Oct. 30 and the upcoming Lyn Knight auction at the Nov. 20 to 22 Professional Currency Dealers Association convention outside Chicago, market activity is back in full swing.

The most impressive large-size type notes included the finest known Series 1882 $20 gold certificate with a triple signature (Friedberg 1175a in Paper Money of the United States by Arthur L. and Ira S. Friedberg), graded PCGS Currency 64 Premium Paper Quality. It had been off the market since Stack’s sold it in 1990 for a then-stratospheric $20,900. As a sign of how the paper money market has outpaced inflation, when it was all over at the October 2014 auction, its new owner parted with $199,750.

Stack’s Bowers director of currency Peter Treglia said that he was “overall … very pleased with the sale.” But despite the incredibly high average price per note, he pointed out that “generic lower to mid-grade type notes have softened up a bit compared to our [August] ANA sale.”

Why this happened is an interesting question with no sure answer. Perhaps, he points out, the paper money market is reflecting the present coin market, or perhaps buyers are slowing down as the year ends.

It is also possible that the massive amount of inventory introduced to the market in recent months was a factor.

The Knight auction will offer over twice the number of lots offered in the Stack’s Bowers sale and is especially strong in national bank notes. Foremost among the nationals is a rare PCGS Currency About Uncirculated 50 (with some edge repairs) F-387 Original Series “Lazy Deuce” from Denver’s Colorado National Bank. It is one of six known and one of the few Colorado territorial notes. Its estimate of $50,000 to $70,000 is not out of reach.