$2 'Santa' note to be offered at auction in Baltimore 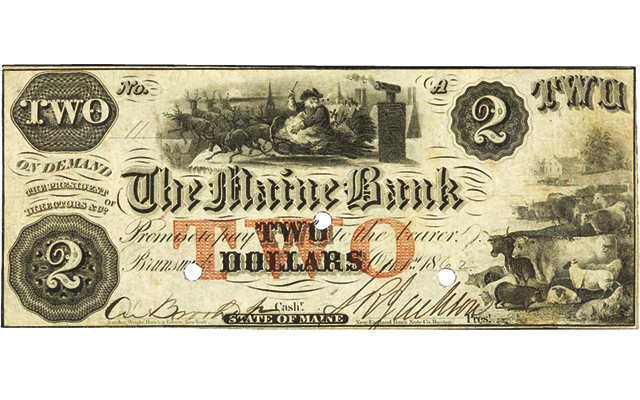 An odd denomination and a fun design make this $2 obsolete note all the more attractive to collectors. The note will be offered by Stack's Bowers Galleries during the June 26 to 29 Whitman Baltimore Summer Expo.

Stack’s Bowers Galleries will auction a $2 obsolete note issued by a Brunswick, Maine, bank at the June 26 to 29 Whitman Baltimore Summer Expo at the Baltimore Convention Center.

The uniface note, issued by The Maine Bank (Brunswick), is dated Oct. 1, 1862. It is graded Very Fine 20 by PCGS Currency. The note is punch-hole canceled.

The uniface note features a scene at the far right of cattle, sheep, pigs and a goat, grazing and resting in a field. A farmhouse can be seen in the far background.

But the clear draw of a collector’s eye is in the upper center of the note with a vignette of Santa Claus seated in a sleigh pulled by eight reindeer.

This scene is one of seven vignettes found on rare obsolete notes that depict the jolly old elf, with three considered very rare. The note in the June auction depicts the most frequently encountered vignette.

“Santa Claus had become a symbol of charity and generosity so it seems only natural that some bankers would take advantage of a ready-made situation by placing vignettes of him on their bank notes,” according to Interesting Notes About Christmas by Roger H. Durand.

The Maine bank was chartered by the state on April 14, 1857, and closed its doors in 1864. Its directors and stockholders then voted to reorganize and reincorporate into the First National Bank of Brunswick.