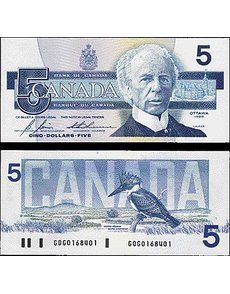 This very rare 1986 Canadian $5 polymer test note sold at auction for $23,000 Canadian on May 30 at the Toronto Coin Expo. The note is considered the finer of two known examples. The note was graded Uncirculated 60 Original by Banknote Certification Service.

The note was sold by Geoffrey Bell Auctions in Moncton, New Brunswick, in conjunction with the Toronto Coin Expo.

Bell said the buyer is a collector in Europe.

The note is considered the finer of two known examples. The note was graded Uncirculated 60 Original by Banknote Certification Service in Ontario.

This was the first public auction of one of the rare test notes.

“Between 1995 and 1998, the Bank of Canada conducted circulation testing of 100,000 notes printed on a material known as Luminus substrate, consisting of a polymer core sandwiched between paper layers. The purpose of the test was to assess their durability. The supplier could not produce the material in sufficient volume, and that issue, combined with questions about its market potential, led the owner of the technology to withdraw their offer to supply the product, in December 1999,” according to the 25th edition 2013 Charlton Standard Catalogue Canadian Government Paper Money.

“The serial number range for the circulation trial was GOG0100000 to GOG0999999. This information only recently became available from the Bank of Canada.”

The note was found by a woman in Eastern Canada who received it when she cashed her paycheck, according to a news release from the Toronto Coin Expo.

“On payday she would visit the local bank to cash her pay cheque, and set aside any nice new bills for a rainy day. Many years later, the notes were handed down to her son, whose research led to the great discovery that he was in possession of one of the Bank of Canada’s circulating polymer Test Notes,” according to the news release.

Luminus was produced by a Canadian paper making company called Domtar with headquarters in Montreal. ¦