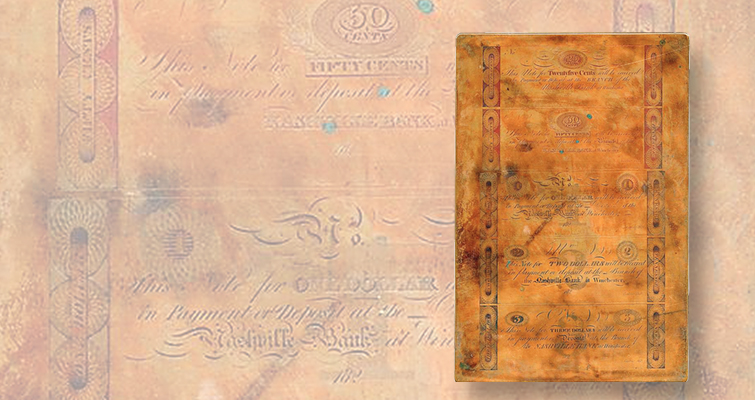 Archives International Auctions LLC will offer this circa 1820 printing plate engraved by William Kneass for bank notes from a Tennessee bank in its Oct. 29 auction in New Jersey.

Featured in the final category, and estimated to bring from $10,000 to $20,000, is a circa 1820 obsolete banknote copper printing plate engraved by William Kneass, who was soon to be named chief engraver of the U.S. Mint. The plate was for the Nashville Bank branch at Winchester, Tennessee. Until Kneass was appointed the second chief engraver of the United States Mint on Jan. 29, 1824, he ran an engraving office in the area of Fourth and Chestnut Streets in Philadelphia.

The plate measures 8.5 by 12.5 inches and is described as “in amazing shape with original golden-red patina with evidence of a cleaning sometime in the distant past.” It comes from an estate. The back is blank.

Kneass is best known for his work on the Classic Head quarter eagles and half eagles and the Capped Bust silver coins. According to the American Numismatic Association Money Museum, he also produced the dies for the 1804 Draped Bust dollars struck in 1834.

The more than 300 lots of world currency include over 50 from China. One of them is described as an extremely rare and possibly unique 1920 $5 Chinese-American Bank of Commerce, specimen issue, hole canceled, with a regular serial number from the Harbin branch. It is estimated at $7,500 to $10,000 in a grade by Paper Money Guarantee of Very Fine 30. It was printed by the American Bank Note Co.

The face has the Statue of Liberty at right, arms at left, and a large circular engraving in the middle. The back is green in color with black signatures in English. “Harbin” is printed on the bottom. The serial numbers are red. 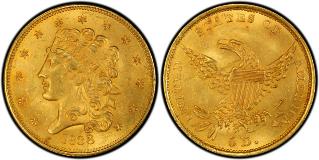 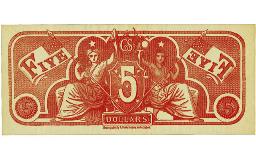 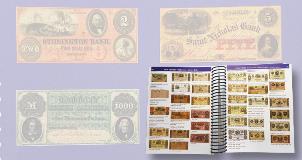