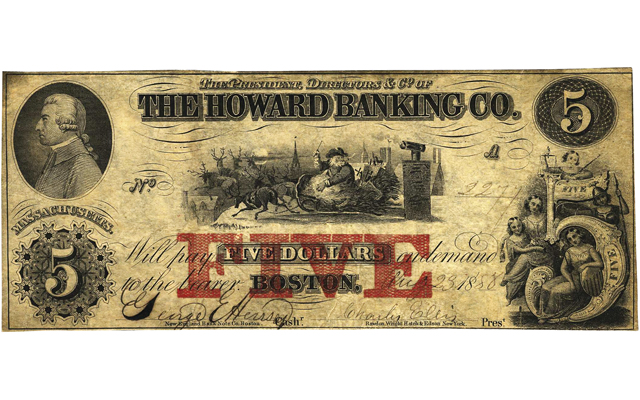 Santa Claus is not limited to paper money of Germany.

Many Americans now numb to the unchanging progression of dead white leaders represented on their paper money, might be shocked to learn of the variety of paper money designs that circulated in the country before federal notes were issued beginning during the American Civil War.

Banks, railroads and many other institutions, of varying worthiness, issued their own money, making a lively business for bank note engravers and printers.

Santa Claus was among the many vignette subjects used for this paper money, and vignettes that featured him were not limited to one bank.

Eight reindeer pull his sleigh, which is about to take off from a snow-covered rooftop. Whether Rudolph takes the lead can't be known, since the note lacks much color and there is no hope to find a red nose!

However, a possibly more affordable option is also available.

Souvenir cards feature printed designs on card stock, and often commemorate bank note and paper money designs. In 1983, the Society of Paper Money Collectors issued a souvenir card for the circa 1850s to 1860s $2 note issued by the White Mountain Bank of New Hampshire. The same vignette of Santa Claus driving the sleigh appears on this note, whose face design is reproduced on the card.

Dealer Ken Barr, who specializes in souvenir cards, lists two versions, with the as-issued card selling for $13 and a postally cancelled version selling for $18. Either would be a suitable alternative to the expensive rarity.

Either the note or card would have a worthy place on Coin World’s “12 Days of Christmas” list.