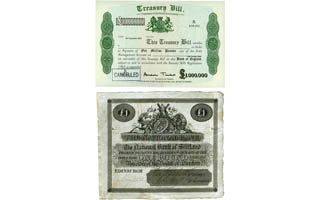 Dix Noonan Webb will offer at auction April 24, 2014, a £1 million Treasury note. The extremely rare note is graded About Uncirculated. The firm will also offer a £1 note, issued by the National Bank of Scotland and dated May 15, 1832. It is graded Good/Very Fine.

A £1 million British Treasury note dated Sept. 8, 2003, is among the lots to be offered in an April 24, 2014, auction of British and other world paper money to be conducted by Dix Noonan Webb in London.

The Treasury note (Lot 103) is stamped CANCELLED and printed on fully watermarked paper. It is only the third Treasury note for £1 million to become available to commerce, according to the catalog description. Two earlier examples, accounting for money received through the Marshall Aid plan after World War II, have previously been sold at auction, according to the firm.

The facsimile signature of the secretary to the treasury, Andrew Turnbull, appears at the bottom of the note. The extremely rare note is graded About Uncirculated.

According to the catalog description, this extremely rare note has a “strong central crease, other light folds and handling,” but otherwise the paper is still crisp and the note grades Good/Very Fine.

The auction will be held at the Washington Hotel in London. Appointments to view lots in person can be made by sending an email to the auction firm at viewing@dnw.co.uk. Lot viewing is also available at the firm’s website www.dnw.co.uk.