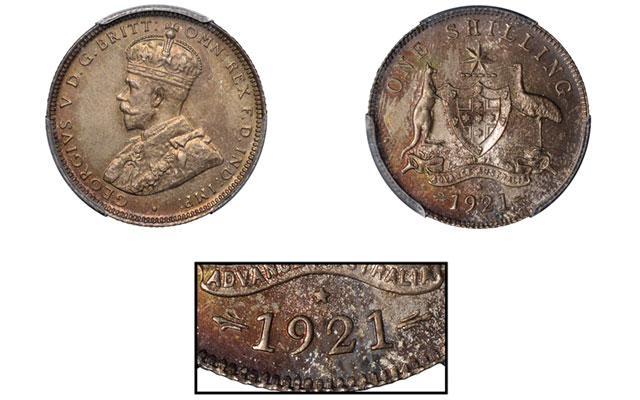 Australian 1921 silver Proof shilling features a star meant to indicate a change in the fineness of silver that was eventually not adopted. 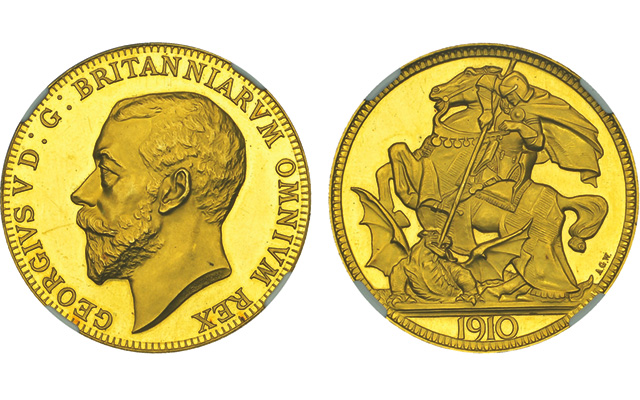 The following is a press release provided by Dix Noonan Webb:

Two major numismatic rarities will be among the highlights of the auction of Ancient, British and World Coins, Tokens and Commemorative Medals to be held by Dix Noonan Webb, the international coins and medals specialists, in London on 11 February 2015. A newly-discovered Australian George V 1921 Proof Shilling with a star above the date, one of just six minted, is expected to fetch £100,000 to £120,000.

“These are very exciting coins to include in our auction,” says Christopher Webb, head of the coins department at Dix Noonan Webb. “The Australian 1921 Proof Shilling has lain un-noticed in a private collection for decades and we cannot trace any example of this coin having been offered for sale within the last 30 years. The George V Pattern Crown is excessively rare and comes with a distinguished provenance.”

The Australian 1921 Proof Shilling bearing the crowned head of George V and with a small star above the date was an indirect result of the economic upheaval in the aftermath of the First World War. The price of precious metals rose and it was decided to reduce the silver content of British coins. It was intended that the same should be done with the Australian silver coinage and dies dated 1920 and 1921 were produced with a small star above the date. This was not strictly a mintmark but was intended to differentiate the new lower quality coins.

In fact the change in silver content was never implemented in Australia but 30 pairs of working dies with stars had already been dispatched to the Sydney mint from London in October 1920 and these were used to produce the 1921 coinage.

The star-marked coins were only ever minted in small quantities — 522,000 currency coins and just six specimen or proof strikings. Of the six proofs produced, two are in the collection of the Museum of Victoria in Melbourne. Both are inferior in condition to the one to be auctioned at Dix Noonan Webb. The latter is in virtually mint state and lightly toned.

The 1910 George V Pattern Crown in gold designed by A.G. Wyon is one of only two known specimens and is expected to sell for £80,000 to £100,000 at Dix Noonan Webb. When the British king Edward VII died in May 1910, plans for new coins bearing the head of his successor George V were put into place long before the latter was formally crowned at Westminster Abbey in London in June the following year. A number of designs were submitted to the authorities for approval, one of which was by A.G. Wyon, a member of a dynasty of designers and engravers which had played an important role in British public life for more than a century.

Wyon’s design had the bare head of the new king facing left on the obverse while the reverse depicted St George on horseback spearing a dragon with the date below this image. Despite his illustrious family pedigree, Wyon’s design was not chosen so his Proof Crown in gold bearing the date 1910 — the year before George officially became king – became a numismatic rarity rather than standard currency. Only two examples are known and the coin to be auctioned at Dix Noonan Webb is in virtually mint state.

It has been in a number of collections over the past century including those assembled by G. Hamilton-Smith, Sir Kenyon Vaughan Morgan, Lady Duveen and C. Dabney Thompson.

It is graded Proof 62 by Numismatic Guaranty Corp.

For full details of the auction, visit the dedicated page at the Dix Noonan Webb website.