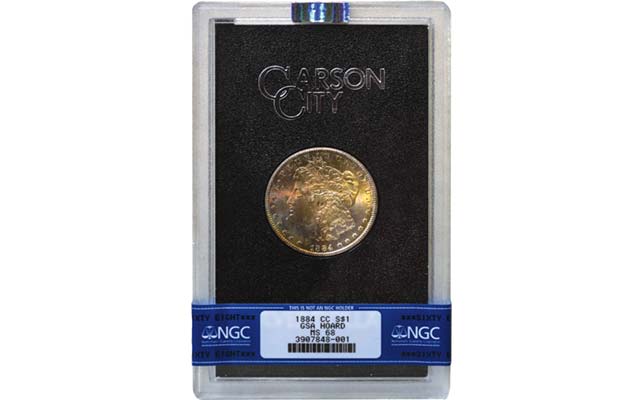 1884-CC Morgan dollar is first from GSA Hoard to be graded Mint State 68 while still in its government-issued holder. 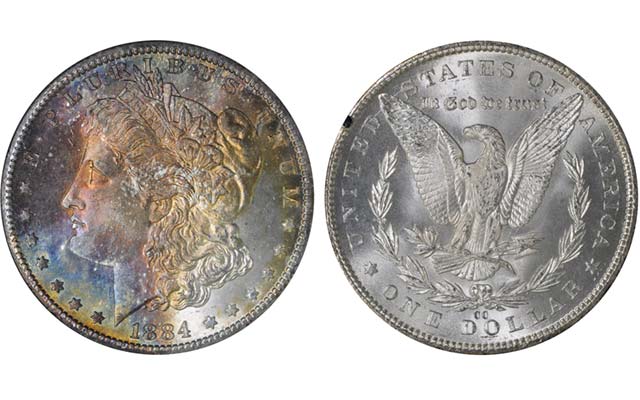 The obverse is toned but the reverse is not. The black spot on the rim between the E and D in UNITED is part of the cardboard insert securing the coin in the GSA holder.

Max Spiegel, vice president of sales and marketing for NGC’s parent entity, Certified Collectibles Group, said April 9 that the coin is the first and only NGC MS-68 GSA Hoard 1884-CC Morgan dollar and one of only two 1884-CC dollars certified as MS-68.

The other MS-68 1884-CC Morgan dollar is not in a GSA holder, according to Spiegel.

GSA refers to the General Services Administration sales in the 1970s of surplus silver dollars stored in 1,000-coin bags by the Treasury Department.

A total of 962,638 of the 1884-CC Morgan dollars were still in Treasury vaults after March 1964, when a halt was ordered to the great Treasury release of silver dollars at face value that began in October 1962.

The 1884-CC coins were among 2.9 million silver dollars transferred from the Treasury to the GSA and stored at the West Point Silver Bullion Depository.