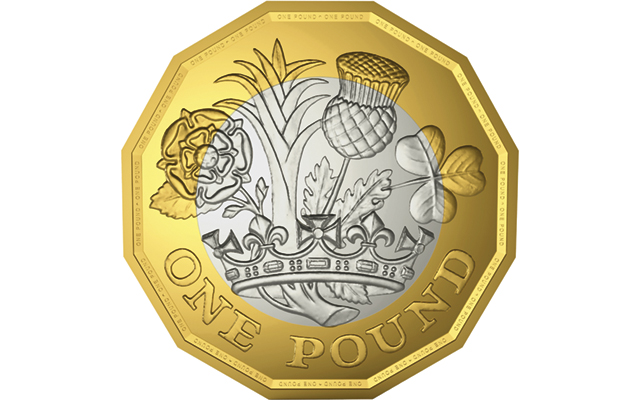 The new £1 coin now has a reverse, and it is from an unlikely source.

The Royal Mint announced the winner of a public competition to design the reverse of the new 12-sided coin that is set for a 2017 release, and the winning designer is 15-year-old student David Pearce.

The pupil at Queen Mary's Grammar School in Walsall, England, was notified earlier this week about his design being selected from a pool of more than 6,000 entries.

Pearce's design features a rose, leek, thistle and shamrock—four well-known symbols of the United Kingdom—all emerging from a royal coronet.

“I was really excited to hear that I had won the competition to design the new £1 coin but hugely shocked as well," Pearce said in a statement. "I heard about the competition through my design teacher at school and I thought I had nothing to lose so I decided to enter. I spent a lot of time researching what coin designs looked like and what sort of designs would represent all parts of the UK before submitting my idea and I honestly cannot believe I have won.”

The final design was refined with the support of renowned artist David Lawrence and lettering expert Stephen Raw.

The Royal Mint asked that entries have designs that symbolized Britain. Other entries had themes that included cups of tea, flags, maps, the weather, famous writers, seaside piers, and even the Rolling Stones.

MORE: What you need to know about the UK's new pound coin

Chancellor of the exchequer George Osborne said that winning the contest means Pearce will "leave a lasting legacy" on UK coinage.

“The competition captured the imagination of thousands of people and David Pearce’s winning design will be recognised by millions in the years ahead," Osborne said. "It was fantastic to congratulate him and other young entrants in person in Downing Street.”

The 12-sided £1 coin will debut in 2017 as "the most secure coin in circulation in the world," according to a Royal Mint release. The new shape is a reaction to rampant counterfeiting of the current £1 coin.

The new reverse design's release follows only weeks after the Royal Mint released its selection of the latest portrait of Queen Elizabeth II that will be used on UK coins' obverses beginning in 2015 with its newest gold sovereign coins.