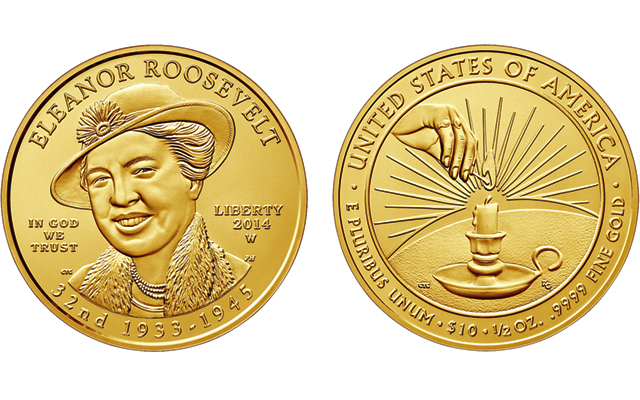 When the United States Mint established a maximum combined Proof and Uncirculated mintage of 10,000 for each of the four 2014 First Spouse $10 gold coins, it did not guarantee it would mint that many.

Before the 2014 coins honoring first ladies Florence Harding, Grace Coolidge, Lou Hoover, and Eleanor Roosevelt went on sale beginning with the Harding issue on July 10, 2014, the Mint calculated a ceiling of 10,000 coins maximum.

Actual orders received by the U.S. Mint help determine how many of the coins struck at the West Point Mint are Uncirculated and how many are Proof.

Because the U.S. Mint was still selling the Harding, Coolidge and Hoover coins, when New Jersey collector Roy Evans wanted to order a Roosevelt coin he assumed it also would still be available.

Evans was disappointed to learn May 12, while trying to place his order for a single Uncirculated Roosevelt First Spouse gold coin by telephone through the U.S. Mint’s contracted customer care center, PSFweb Inc. in Texas, that neither the Uncirculated nor Proof Roosevelt coins were available.

“In 2014, the Mint was authorized to produce a maximum of 10,000 First Spouse Series One-Half Ounce Gold coins per design,” Stump said via email June 2. “Maximum mintage is set at 10,000 across all product options, with customer demand determining the ratio of Proof coins to Uncirculated coins produced. Each design in 2014 was produced to a number based on historic demand trend lines as well as forecasted demand. Unless sales and demand supports producing the maximum mintage, the actual number of coins struck is lower.

“The 2014 One-Half Ounce Eleanor Roosevelt First Spouse Gold Coins went on sale Sept. 4, 2014, and a balance of inventory was carried over into 2015. This remaining balance sold out on Jan. 16, 2015, for the Proof (HP7) and March 18, 2015, for the Uncirculated (HP8). The other three designs from 2014, which also have mintage less than the maximum, have not yet sold out their remaining inventory.

The U.S. Mint has already released the 2015-W Bess Truman and Mamie Eisenhower First Spouse gold coins. The coins depicting Jacqueline Kennedy and Claudia “Lady Bird” Johnson are yet to be released in 2015.