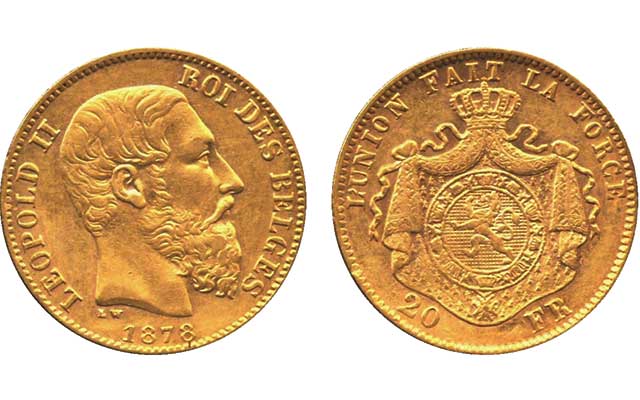 An 1878 gold 20-franc coin from Belgium is of the style and size of the 217 gold coins discovered in a Nazi-era hoard buried in Germany.

A metal detectorist in northern Germany discovered the find of a lifetime last October.

Amateur archaeologist Florian Bautsch found 217 gold coins in a hoard that had been buried beneath the roots of a tree that later was removed. The tree's removal had somewhat scattered the coins.

Bautsch, 31, found one coin, then nine more, before contacting archaeologists to remove the rest. The hoard recovery process took two weeks, according to an English-language report from TheLocal.de, Germany’s news in English.

The coins had been buried for some 70 years when Bautsch located them. Though scattered around the find area, the coins had once been in two pouches, according to Thelocal.de.

Officials have no idea who buried the hoard or why it wasn’t recovered until now.

The hoard is the largest gold find in the town of Lüneburg in Lower Saxony, a state in northwestern Germany near Hamburg.

According to TheLocal.de, 128 of the coins are from Belgium, 74 from France and 12 from Italy. The remaining three coins were from Austria-Hungary.

Each of the coins weighs 6.45 grams and measures 21 millimeters in diameter, according to TheLocal.de, suggesting they are the popular 20-franc coins.

Most of the coins were minted between 1850 and 1910, with the oldest dating to 1831, it reported. The hoard was likely buried during or soon after World War II but no later than 1950, based on forensic examination of pasteboard packaging material also found with the coins, TheLocal.de reported.

The coins were put on display at the Lüneburg Museum on July 14.

Lüneburg archaeologist Edgar Ring said that the coins appear to have belonged to the national Nazi bank, because that bank's emblem, an imperial eagle and swastika, is on two aluminum seals found with the coins. The seals would have been attached to the now-disintegrated pouches that held the coins.

That suggests the coins may have been stolen, Ring said.

Archaeologists are not disclosing the exact location of the find to protect it from illegal hunting.

Because the coins were in bank bags, archaeologists note that state officials may have taken the coins from an individual or individuals to fund the war machine. Or, the coins may have been part of a robbery or war crime, both of which have no statute of limitation.

Want to know about more coin hoards? Check out these Coin World stories!