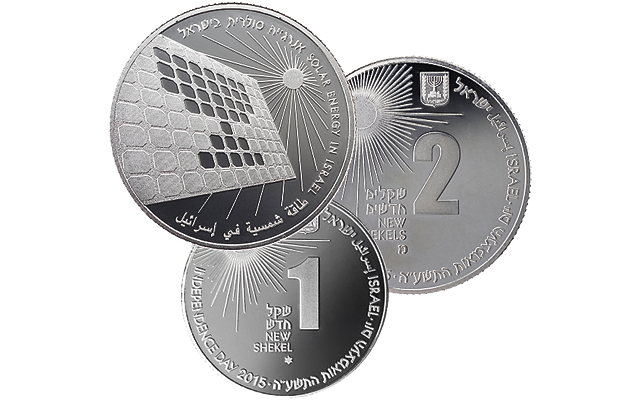 A 2015 coin series from Israel celebrates Israel’s achievements in harnessing solar energy. The standard three versions — two in silver and one in gold (not shown) — are available.

Image courtesy of the Israel Mint.

The Bank of Israel’s newest coin series, announced by the Israel Mint on May 11, also continues the annual tradition of marking the nation’s anniversary of founding.

Israel’s abundant sunshine and technological capabilities have enabled wide development of solar power. The southern desert region of the country has the highest levels of solar radiation in the world, according to the Bank of Israel. Derived from sunlight, solar energy is renewable and clean, and global demand for this form of energy is constantly growing, the bank notes.

The first commercial solar field in Israel, converting sunlight to electricity by use of solar panels, was launched in 2011. Today, this field produces 9 million kilowatt hours per year for the Israel Electricity Co. At the beginning of 2014, 11 more solar fields were inaugurated, six of them located in the desert south, according to the bank.

According to the International Energy Agency, solar energy, in the future, may well become the major source of electricity.

The shared obverse of the coins, designed by Ruben Nutels, shows the face value, Israel state emblem, the nation’s name in English, Hebrew and Arabic, INDEPENDENCE DAY 2015 and a decoration representing the sun and its rays.

Meir Eshel designed the shared reverse, which features the sun shining directly onto a solar panel, lighting up cells within the panel that form the shape of a menorah, the seven-branched candelabrum.

The legend SOLAR ENERGY IN ISRAEL in English along with its parallels in Hebrew and Arabic arc around the right border of the coin.

Two sets of the coins are available. A two-coin set of both silver coins costs $125. A three-coin set of all three denominations is $1,215.

Prices quoted were current at publication but may be subject to change in concert with the precious metals market.

To learn more about the coins, visit the Israel Mint website.