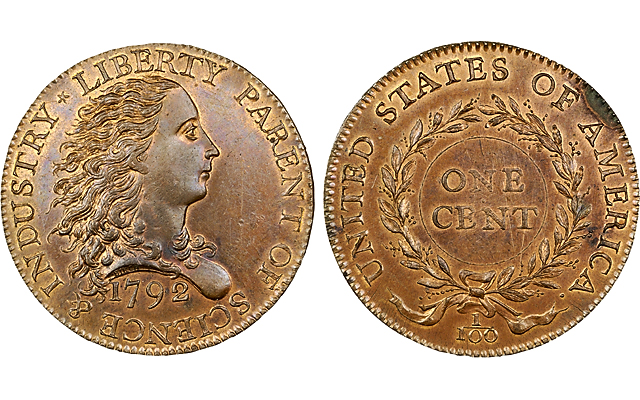 The Donald G. Partrick Collection, heading for auction starting in January 2015, includes a 1792 Birch cent, a pattern for U.S. coinage that was not adopted.

What is being billed as "the finest collection of colonial American coins ever assembled" is heading to auction, the first sale scheduled for January 2015 in Orlando, Fla.

Heritage Auctions has announced that it will offer the Donald G. Partrick Collection of Extraordinary United States Colonials, beginning with Part I at this coming January’s Florida United Numismatists convention auction, set for Jan. 7 to 10.

Other sales are planned in conjunction with the 2015 and 2016 American Numismatic Association conventions and the 2016 FUN convention.

“This series of auctions is unprecedented in numismatics,” said Jim Halperin, co-founder of Heritage Auctions. “This is an incredible grouping of coins, the likes of which we won’t see again.”

“The name of Donald Groves Partrick is well known to colonial collectors and his cabinet is second to none in the field,” said Mark Borckardt, senior cataloger for Heritage Auctions. “His collection also includes an unprecedented assemblage of 1792 U.S. Mint Patterns and coinage of the Confederacy.”

Part I of the collection includes 12 U.S. Mint patterns of 1792, a total that far exceeds the nine examples in the Garrett Collection auctions, the eight examples in the Norweb Collection sales, and the seven examples held in the Smithsonian Institution.

Also included in Part I are 12 Continental dollars, including two of the four known silver examples. A third will be offered in a later auction.

Massachusetts silver is represented in the first sale by six NE shillings, five Willow Tree pieces, 40 Oak Tree coins and more than 50 Pine Tree coins, while seven Higley coppers in the collection include six different varieties, among which is the famous and unique “WHEELE GOES ROUND” copper. Maryland collectors will be intrigued by the offering of 10 Lord Baltimore coins, six Chalmers pieces and a Standish Barry threepence.

One of the most fascinating sections of the first sale is the nearly 30-strong grouping of New York coppers, including five Confederatio coppers and 11 Immune or Immunis Columbia coppers. Future auctions will offer, according to Heritage: "additional New York pieces, including two Brasher doubloons, one of the New York variety (the finest known, ex Garrett) and one of the Lima variety; Don Partrick’s incredible Connecticut and New Jersey coppers; and amazing Washingtonia."