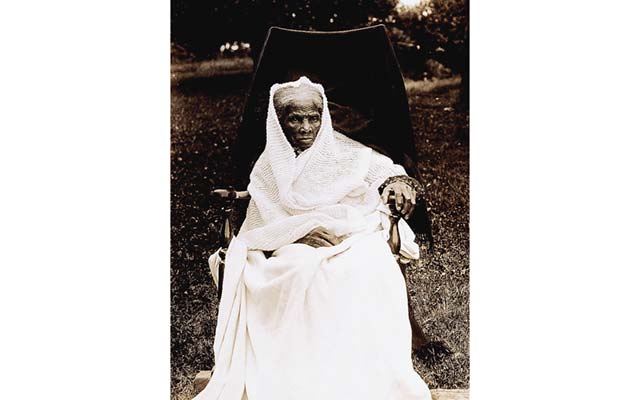 Harriet Tubman around 1911, probably at her home in Auburn, New York.

The findings portion of the bill, which typically establishes the historical importance of the individual, summarizes Tubman’s extraordinary story in 19 points.

It begins, “An integral part of the fight for abolition of slavery, Harriet Tubman, was born into slavery as Araminta Minty Harriet Ross in Dorchester County, Maryland, to Harriet Rit Green and Ben Ross.” The exact location and year of her birth is unknown, but historians estimate it to be around 1820.

In 1850, U.S. Congress passed the Fugitive Slave Law of 1850 that called for the law enforcement agencies of all states to report runaway slaves for capture. At this time, Harriet was an escaped slave. The findings explains, “In the cover of night guided by the North Star, Harriet escaped by traveling nearly 90 miles to Pennsylvania in 1849 by means of the Underground Railroad, a well-organized network guided by White abolitionists, freed, and enslaved Blacks.”

In spite of the new law, “Harriet did not yield to the growing danger and risked her own newly acquired freedom to return to free her family and other slaves while redirecting the Underground Railroad to Canada, which prohibited slavery.”

Her leadership earned her the nickname of “Moses” as she led slaves to freedom. During the Civil War she led an armed expedition that liberated more than 700 slaves during the Combahee River Raid in South Carolina. She continued to advocate for equal rights until her death in 1913.

In a 2012 essay honoring Black History Month, Rep. Clarke wrote, “We must never forget that Black History is American History. The achievements of African Americans have contributed to our nation's greatness.”

This bill was assigned to a House committee on April 13, which will consider it before possibly sending it on to the House or Senate as a whole.